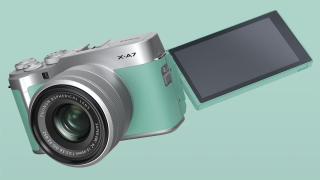 After a week of intense leaks and rumors, the Fujifilm X-A7 has officially been announced - and it certainly seems to live up to the hype. Packed full of tantalizing features, the X-A7 looks like the perfect entry-level camera for anyone wanting to step away from smartphone photography. However, with 4K video and a satisfyingly large vari-angle LCD screen, it's also likely to make an attractive proposition for the vlogging community as well.

For those looking for a bit of style from their camera, the Fujifilm X-A7 won't disappoint. The X-A7 comes in four different color options, silver, camel, mint green and dark silver.

While the body only weighs in at 320g (which is around 41g lighter than the current model), this camera is no lightweight. Fujifilm advises that this camera enables users to take approximately 440 frames per charge. This means that you can take your camera out on a day trip without having to worry about bringing along a charger or extra batteries.

One of the most interesting features on the Fujifilm X-A7 is the 3.5-inch LCD monitor. While this means a lack of a D-pad, the screen seems to function remarkably like a smartphone screen. In fact, Fujifilm's press release states that "It provides a touch-response performance equivalent to or better than that of smartphones in general, enabling easy camera operation."

The Fujifilm X-A7 is also the first X series model to feature a vari-angle screen that users can adjust to any angle. This means that not only can you use this to get creative with your photographic compositions, you can also swivel the screen around to capture self-portraits or to vlog.

The X-A7 features a newly-developed 24.24MP APS-C sensor and features about 8.5 times more phase detection pixels than the current model to help enhance AF speed and accuracy. Fujifilm advises that this has not only enhanced AF tracking of a moving subject and Face/Eye detecting AF performance, but that it also allows users to attain fast and accurate autofocus in low light conditions.

With plenty of interesting features packed into a stylish-looking body, we're confident that the Fujifilm X-A7 is set to prove a hit with entry-level users and the vlogging community. We can't wait to get our hands on one and take it for a test-drive.