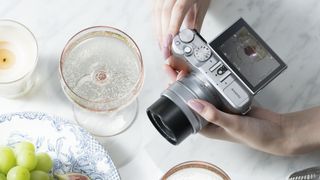 When it comes to Fujifilm X-A5 deals, we've got you covered. Our price tracking system has scanned all the major retailers to bring you the biggest bargains, so you can be sure you're getting the cheapest price possible on this retro-styled mirrorless model. Here are today's best Fujifilm X-A5 camera deals. And we have seen some fantastic prices on this camera, thanks in part to the recent launch of the similar Fujifilm X-A7.

The perfect step up from a smartphone

The retro-styled Fujifilm X-A5 is a small mirrorless camera that's designed to encourage photographers to make the step up from their smartphone’s built-in counterpart.

It arrived with the well-reviewed heritage of Fujifilm’s X-series system propping it up, but with average specs at an average price, and lacking a built-in viewfinder, what does this model possess to help it stand out from the bustling crowd?

Well, for starters, there’s its excellent image quality – and the fact that it enables users to capture sharp, well-exposed shots without even trying. It's possible to leave the camera set to Auto ISO or SR Auto modes before forgetting about lighting conditions and just snapping away, consistently getting usable images in return.

The camera also comes bundled with a retracting kit lens, the Fujinon XC 15-45mm f/3.5-5.6 OIS PZ kit lens, which is equivalent to around 23-68mm in 35mm terms. This  is a little wider than the average kit lens, but also a little shorter at maximum focal length. When married to the X-A5's camera body the total weight is a very manageable 496g, and the fact that the lens retracts aids overall portability. It's closest rival in terms of size is probably Canon’s EOS M100.

Given the market at which the X-A5 is aimed, it’s no surprise to find that it mirrors the Olympus E-PL9 in offering a LCD screen that flips up through a 180° angle to face the front for selfies, as well as a Portrait Enhancer mode to help ensure smoother skin (at least as far as the images produced goes). When you first flip up the camera’s LCD screen for selfies, the screen image is upside down and partly obscured by the top of the camera, but this can be put right by simply pulling the screen up by a few millimetres on an easy-to-miss sliding cantilever mechanism.

Read more: 10 tips on getting the most out of your Fujifilm camera

The X-A5’s photos are sharp and rich in colour, and generally well exposed too. You don't need to get embroiled in technicalities to achieve these, although more experienced photographers will be able to drill into the manual settings provided to find much the same degree of control as more upmarket enthusiast-level cameras.

For an entry-level model, the X-A5 doesn’t stint on video specification and even boasts a 4K shooting option, although the fact that it only manages this to 15fps may leave some to wonder what the point of including it is.

Ultimately the X-A5 isn’t really designed for more experienced photographers. But, for first timers, its large sensor and ability to swap the lens in use opens up a whole world of photography beyond the smartphone. Scroll down for today's best Fujifilm X-A5 deals.