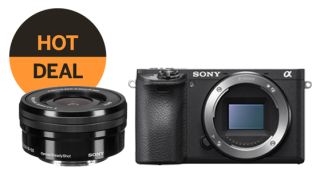 Right now the Sony A6500 with 16-50mm lens is just $898 at B&H, which is an amazing price for this unique 24.2MP street-style body with sports camera performance and high-end 4K video capabilities.

And if you don't want this lens, then B&H is offering a body only version for a tasty price of just $798.

Whichever of these two kits you choose, B&H Photo will throw in a Sandisk 64GB SD memory card, a bag, and a spare battery.

Sony A6500 with 16-50mm lens: $898.95 (was $1,498)
It's styled like a rangefinder but equipped with the power and speed of a sports camera, with 4K features to tempt serious and professional videographers. Coupled with the standard zoom lens, you can take on all tasks! Comes with a free accessory kit that includes a 64GB Sandisk Extreme Pro memory card, a spare battery, and a bag.View Deal

Sony A6500 body with accessories: $798 (was $1,198)
Already have a Sony E-mount lens, or just want to pick your own choice of lens to use with your Sony a6500? Then there is this body only kit available, which still comes with a free  64GB Sandisk Extreme Pro memory card, spare battery, and  bag.View Deal

On paper it delivers the goods against DSLR rivals, such as the Nikon D500 and Canon EOS 7D Mark II, thanks to its great autofocus and buffer capacity. If you're looking for a kit to shoot in multiple scenarios, this is it!

Sony A6500 review
The best Sony camera in 2020: from Cyber-shots through to Sony Alphas
The best Sony lenses in 2020: top lenses for Sony mirrorless and Alpha cameras