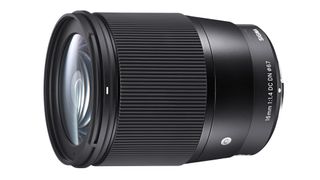 Although Sigma has focused more on its acclaimed Art line of lenses in recent years, the company claims the new lens has image quality that rivals that of the Art series.

Available for users of Micro Four Thirds and Sony E-mount lines, the lens is set to be compatible with a range of recent arrivals in both stables, such as the Sony A6500 and Olympus OM-D E-M10 Mark III, as well as older models like the Panasonic G7.

Sigma claims this is the world’s first interchangeable lens for mirrorless Sony E-mount cameras in the APS-C format to offer a 24mm focal length (in 35mm terms) and an f/1.4 aperture.

On a Micro Four Thirds camera, such as the Olympus OM-D E-M1 Mark II, the effective focal length of the lens is doubled to 32mm, which potentially makes it a good option for street photography, reportage and environmental portraiture.

A stepping motor is said to provide smooth autofocus performance during video recording, its design compatible with Sony's recent Fast Hybrid AF technology. Other features include a nine-bladed rounded diaphragm and protection against dust and splashes. It will also ship with a petal-type lens hood (below) as standard.

The lens is the second Contemporary f/1.4 prime optic intended for mirrorless users, following the 30mm F1.4 DC DN | Contemporary that arrived last year. Sigma has also today announced that the company has plans to add a telephoto optic to the same series.

Sigma has confirmed a suggested retail price of £449.99 for the lens in the UK, and also states that the lens will be available at the start of December. Pricing in other territories has not yet been disclosed, although the lens is currently on sale at one US retailer for $449.00.