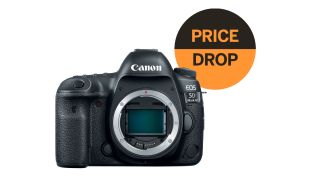 The Canon 5D Mark IV is one of the best cameras around, suitable for enthusiast and professional photographers alike. With a 30MP CMOS sensor, an expanded 61-point AF system and a maximum ISO sensitivity of 32,000, there's not much that the Canon 5D Mark IV can't do.

If you've been lusting after this Canon camera for a while, you'll be pleased to hear that Wex Photo Video has a fantastic deal going right now that knocks £400 off the price. However, you'd better act quickly – this deal ends today!

The Canon 5D Mark IV is capable of 4K video capture at 30fps and Full HD video at 120fps. The DIGIC 6+ processor also enables 7fps shooting. The 5D Mark IV has WiFi and NFC connectivity, which means you can transfer and share files quickly and easily.