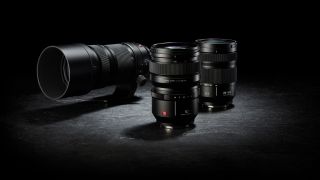 At the global launch of the Panasonic Lumix S1 and Lumix S1R  full-frame earlier this year, Panasonic also revealed its plans for its new full frame mirrorless camera  system in a fast-moving big-screen presentation. And in a blink-and-you’ll-miss-it-moment it showed a slide which revealed not only its own plans for native Lumix S lenses but also those of Leica and Sigma.

Since then Panasonic has unveiled a third camera in the line-up – the Panasonic Lumix S1H, which is aimed at cinematographers and which will go on sale in  September for $3999.

Leica already has its own full-frame mirrorless camera in the SL, and Sigma has announced its super-small Sigma fp full-frame camera that will use the triumvirate parnership's mount. But what lenses can be used with these five cameras?

Three Lumix S lenses are available right now, and a fourth is on its way, these are:

This is the standard kit zoom, which is the lens most often bundled with the Lumix S1 or SR. The lens has a substantial feel, and is a good match for these chunky full-frame mirrorless cameras.

This is the first in the Lumix S Pro series, and boasts an 11-bladed iris for “exceptional” bokeh. Weighing 955g, Panasonic claims it has “outstanding” sharpness across the frame. There is no optical image stabilizer (OIS) in this model, but the cameras have in-body stabilization.

This is the first telephoto in the range, with an f/4 constant aperture and built-in stabilization. With its tripod foot, and its substantial build this feels more like a 70-200mm f/2.8.

Considered the standard zoom by many pro photographers, the pricing and availablity for this lens was announced with the full specification of the Panasonic S1H. It is dust and splash resistant, and offers both linear and stepping motors for speed and precistion, with a clutch mechanism for switching from AF to manual. It goes on sale in October 2019 at a price of $2,199.

These four lenses cover some of the basics, but this still leaves lots of gaps.

2020 will bring a super-telephoto lens, two primes and a macro lens, but that's all the information so far released.

The Panasonic roadmap is only part of the story, of course, because Leica and Sigma will be producing L-Mount lenses too.

Leica lenses are out there already

The first revelation was that there will be no fewer than 18 L-Mount lenses from Leica by the end of 2020. Leica already makes 8 L-Mount lenses for its Leica SL camera, which also uses the Leica L-Mount, which cover popular zoom and prime focal lengths (albeit at considerable cost!).

Leica L-mount lenses announced or launched so far are:

Leica also make adaptors to allow its own R-mount, M-mount and S-mount lenses to be used on L-mount cameras. Additionally, it has an adaptor for using Arri PL-mount cine lenses.

But that still leaves ten Leica lenses to come by the end of next year. We do know that 35mm f/2 and 50mm f/2 Summicron lenses are coming in 2019.

Leica lenses are traditionally fearsomely expensive, so these new Leica optics may be of interest only to high-end users and demanding professionals, but at the other end of the scale Sigma has built its business on making high-quality lenses at much lower prices than own-brand equivalents, so the news that there will be 14 L-Mount Sigma lenses by the end of 2020 was even more exciting.

These are the same 14 lenses which have already been adapted for the Sony FE mount and include wide-aperture primes from 14mm to 135mm.

They will also be producing the Sigma 14-24mm F2.8 DG DN Art in the L-mount - which will be the first proper wide-angle zoom for the system.

The first 14 of these lenses will be (with anticipated shipping date, and indicative pricing):

Sigma will also be making two mount adaptors, allowing Canon EF and Sigma SA mount lenses to be used on Panasonic S1 and S1R bodies, as well as on the Leica SL and its own yet-unnamed 60-megapixel L-mount camera (which is scheduled for 2020).

The Sigma MC-21 SA-L-mount converter promises the ability of being able to use a further 29 of Sigma's existing primes and zooms. The full list of these are:

Panasonic, Sigma and Leica are of course the three companies that make up the L-Mount alliance announced at Photokina 2018. Hopefully, we will now see the number of L-Mount lenses grow quickly.

This is essential if Panasonic is to make a serious dent in the full frame mirrorless camera market with its Lumix S1, Lumix S1R and the forthcoming 6K Lumix S1H.

Sony already has a big lead in its native lens range, but Nikon and Canon are still in the early stages of populating their full frame mirrorless lens ranges – so if Panasonic is going to strike, now’s the time to do it!