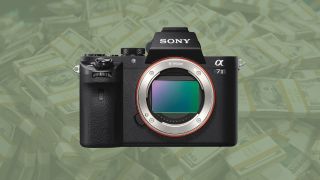 Sony has dominated the full-frame mirrorless market with its line of Alpha cameras, and the Sony A7 II has remained a perennial favorite ever since it launched.

Wex Photo Video was already around £100 cheaper than other retailers, but add Sony's current cashback promotion into the mix and you can redeem a whopping extra £300 off your purchase.

Sony A7 II + Canon EF lens adaptor: £798 (with cashback)
Save a staggering £400 on this brilliant bundle, featuring the full-frame 24.3MP Sony A7II along with the Sigma MC-11 adaptor to use Canon EF lenses. Redeem your £300 saving from Sony via its insane Summer Cashback scheme!
UK deal: ends 01 SeptemberView Deal

Its full-frame 24.3 megapixel sensor is still a force to be reckoned with, powered by a hybrid contrast and phase detect autofocus system (with 99 AF points for the latter and 25 for the former) delivering fast and accurate AF performance, with 5fps burst shooting, 1080p video recording up to 60fps, and 5-axis in-body image stabilization.

The A7 II has a bigger brother in the shape of the Sony A7 III, which boasts 4K video, a faster burst rate and more autofocus points, but surprisingly it actually features a very slightly lower resolution image sensor.

If you're not worried about 4K and you don't plan to shoot fast action, the Sony A7 II is still more than a match for its bigger brother, but check out our three-way Sony A7 vs A7 II vs A7 III comparison to see how the three generations match up!