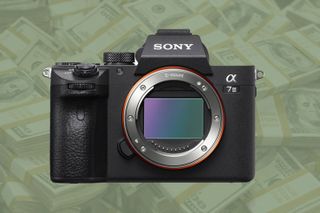 With Halloween over and November well under way, we're not too far away from seeing some exciting Black Friday and Cyber Monday deals hitting the internet. However, even though we still have a few weeks until the Black Friday period is upon us, we're still seeing some fantastic deals - including this amazing $200 discount on a Sony A7 Mark III!

This Sony mirrorless camera is a well-rounded body that's great for both photography and videography. With a 24MP full frame CMOS sensor and a 693-Point Hybrid AF system, the Sony A7 Mark III is a perfect addition to anyone's kitbag. The BIONZ X image processor help to make the A7 Mark III's 10fps continuous shooting rate possible. Meanwhile, the tilting 3.0" 922k-dot touchscreen LCD enables you to easily use your camera in Live View mode.

For those who prefer looking through the viewfinder, the Sony A7 Mark III offers a 2.36m-dot Tru-Finder OLED EVF for "clear and bright" eye-level monitoring. Even more interestingly, for professionals who need reliable results, the Sony A7 Mark III has dual SD memory card slots and a NP-FZ100 battery that gives up to 710 shots per charge.

The Sony A7 Mark III is a fantastic mirrorless camera for both photographers and videographers - and now you can pick one up with a $200 discount. What a bargain!