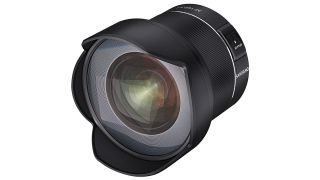 Nikon users may be patiently awaiting the official announcement of the company's new mirrorless camera later this week, but there's some good news for any users planning on sticking with their DSLRs: Samyang is now developing autofocus lenses for Nikon DSLR bodies.

The company has spent much of the past year releasing wide-aperture prime lenses for Canon and Sony bodies, such as the Canon-fit XP 50mm F1.2 and Sony-fit AF 24mm F2.8 FE. Its first contribution for Nikon owners, however, is the AF 14mm F2.8 F, a wide-angle, wide-aperture lens designed for full-frame cameras such as the D850 and D750.

Not only is the lens capable of autofocus, but Samyang also claims that the system here is faster, more accurate and quieter than previous AF 14mm F2.8 lenses. The company doesn't specify which exact lenses this refers to, although it did announce a 14mm f/2.8 lens earlier this year for Canon users.

The weather-sealed lens weighs just 484g without any lens caps and its hood, and it also boasts a minimum focusing distance of 20cm.

Samyang expects the new lens to be available from September, and has set a suggested retail price £649.99 in the UK. We'll update this page with information on pricing for other territories as it becomes available.

Read more: 23 things you should check when buying a new lens