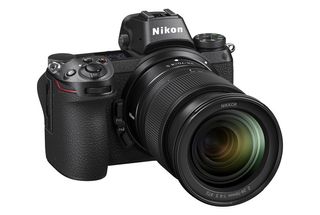 Nikon has revealed further details on the development of new firmware for its full-frame mirrorless cameras, the Nikon Z 7 and Nikon Z 6, first announced at CES in January.

The firmware will enable new functions, such as Eye-Detection AF, RAW video output, and support for CFexpress memory cards. In addition, the cameras’ AF/AE functions will be improved. Here's the full lowdown:

2. Increased AF/AE performance (scheduled for release in May 2019)
AE (auto exposure) tracking will soon be possible in continuous high-speed (extended) mode, in addition to the current AF tracking. Low-light AF performance will also be improved, enabling faster autofocus in dark or dimly lit surroundings with both still-image shooting and movie recording.

3. Support for RAW video output (release date to be announced)
Output of 4K UHD and Full HD RAW data stream from the camera will be supported. The output RAW data stream can then be recorded in the compatible RAW format using an external recorder. This will allow users to utilise rich 12-bit colours to achieve flexible colour grading.

4. Support for CFexpress memory cards (release date to be announced)
The new firmware will provide support for CFexpress, a new standard for memory cards that offer users greater security. They deliver high-speed performance for a more efficient workflow. After the upgrade, users will be able to use both CF Express as well as XQD cards in their camera interchangeably. In addition to the Z 7 and Z 6, In the future, CFexpress memory card support will also be added to the Nikon D5 (XQD-Type), Nikon D850, and Nikon D500 digital SLR cameras as well.