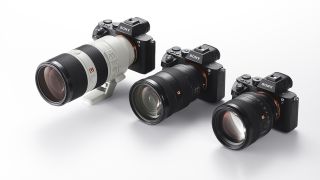 Recent years have seen Sony gone from strength to strength as a major player in the photographic industry.

While initially their contribution may have been met with scepticism from devotees of the ‘Big Two’ - Canon and Nikon - they have continually proved themselves as innovative and more than capable of producing quality cameras at a competitive price point.

Since transitioning their focus to the mirrorless market, the company has managed to secure a leading position in terms of volume of sales and preference from professional photographers. But while it might look as if Sony has taken its eye off its APS-C camera range, rumors are growing there's a new high-end Sony A7000 model on its way.

At the forefront of this success have been the A7 and A9 series mirrorless cameras - full frame compact system cameras with professional specifications and solid build quality. 2018 saw the release of the Sony A7 III, a 24.2MP model with exceptional dynamic range, colour rendition and low light performance.

This makes it the perfect addition to the Sony range for enthusiast photographers. A high point was when the camera was recognised in the EISA awards for 2018/19, scooping the top spot of Camera of the Year, confirming its competitive specification.

Other announcements and releases have confirmed Sony’s commitment to expanding their camera system. Two major lens launches this year were that of the FE24mm f/1.4 GM and FE 400mm f/2.8 GM OSS. Both of these models are aimed squarely at advanced and professional photographers, and along with the numerous future models on their lens roadmap, Sony’s focus on the pro CSC market is clear.

At Photokina 2018 it was announced that Sony had risen to become the number one camera manufacturer, not only of pro-series mirrorless models but of all Full Frame cameras, across all categories, for the first half of the year.

This is no doubt a cause for concern at Canon and Nikon, who both pioneered commercially available, full frame camera technology in the digital age. This has been reflected in the release of competing models from both companies, in the shape of the EOS R and Z system respectively.

Sony have not stood still in other areas of the industry either. The popular RX100 series of compact cameras was updated with a new Mark VI version, which saw the addition of a 24-200mm equivalent zoom lens, articulated touch screen, updated processing engine, increased autofocus speed and improved electronic viewfinder.

The 4K video recording was carried over from the Mark V, which helped make that camera popular amongst vloggers.

An issue that has since been raised in multiple reviews is the lack of support for external audio recording devices, meaning users must rely on the internal microphone.

This is a potential deal breaker for some high-end videographers, considering the comparatively high price. It is encouraging to see Sony transferring technology used in its advanced interchangeable lens cameras into its compact models however, and the RX100 Mark VI remains a solid contender.

Looking ahead at what we can expect from Sony in 2019, the announcement of the A7s III is rumored and would certainly fit with the company’s camera renewal schedule.

This new model would likely feature a host of refinements to the video recording capabilities, including 10 bit video capture and possibly a removal of the time restriction, which currently limits the A7s II to 30 minutes of unbroken video clips. Dual memory card slots would also be appealing.

Furthermore, many devotees hope to see the release of a new APS-C format mirrorless camera as an update to the now ageing A6500.

While the dedication to the full frame market has been profitable for Sony, it does seem unlikely that their APS-C lineup would not be kept competitive going forward.