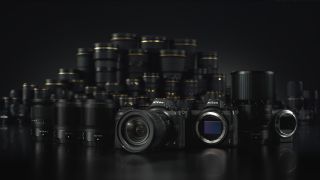 Nikon launched its full-frame mirrorless camera system in 2018, and with the arrival of the Nikon Z6 and Nikon Z7 came a new lens system using the new Nikon Z mount. This mount was not directly compatible with the Nikon F mount, which had been used in different variations on Nikon's SLRs and DSLRs since 1959, meaning that Nikon had to design a whole new line of lenses.

Since the Z-mount was first launched, Nikon have continued to introduce exciting pieces of glass. The arrival of the Nikon Z50 meant that Nikon then added a line of DX Z-mount lenses for APS-C lovers.

However, with the most recent lens roadmap, unveiled with the launch of the Nikon Z5 (the fourth camera in the range), Nikon is now promising that it will have no fewer than 24 Z-mount Nikon lenses by 2021.

The good news for Nikon fans, as they wait for all these optics to be released, is that they can use all current Nikon DSLR lenses on the new cameras – and they can do so without focus or exposure restrictions, using the specially designed Nikon FTZ Z Mount Adaptor often sold with the Nikon Z6 and Z7.

The new Nikon Z mount has a diameter of 55mm, making it 17% bigger than the F-mount, and with that comes the promise of faster lenses than we have seen before – for example, the super-fast Nikkor Z 58mm f/0.95 S Noct. The flange distance (the distance between the back of the lens and the sensor) is now just 16mm, as there is no mirror to build into the light path.

Building a whole new lens system entirely from scratch takes time, so new zooms and primes using the Z mount have been gradually introduced by Nikon. The company is keen to get users on board with the new system, so it has published an official Nikon Z lens roadmap (above) that gives a view of what lenses it will be introducing and when.

The latest roadmap stretches through until 2021 and contains 23 different lenses. The manufacturer managed to get 10 lenses on the market in time for the start of 2020, making its Z system bodies a viable platform for photographers looking for the best mirrorless camera.

Here is a rundown of the already-available lenses on the Nikon Z lens roadmap, as well as those that are on the horizon – and we'll keep this page updated as Nikon announces new optics…

The 24mm f/1.8 was the most recent Z-mount prime lens launched by Nikon, and its fourth f/1.8 prime. It's notable that the competing Canon RF lens roadmap doesn't feature any first-party primes this wide, as Canon's widest prime lens is 35mm.

This was the first prime to be launched for the Z system of lenses, offering the classic 35mm focal length typically favored by street photographers, documentary photographers and photojournalists.

This classic standard lens prime is remiscent of the lenses that many people got as their kit lens when they bought an SLR back in the Sixties and Seventies. Again it's notable that Canon doesn't offer a cheap "nifty fifty" for the RF mount, only a premium f/1.2 version that costs thousands of dollars.

Probably the most anticipated lens on the Nikon Z lens roadmap, this monster prime lens has a phenomenal f/0.95 maximum aperture and was designed to showcase what the Z mount is capable of. This lens weighs 2kg and costs a whopping $8,000!

This short telephoto has the ideal wide aperture and focal length for people shots. Its classic 85mm length makes it a key lens in the arsenal of portrait, social and wedding photographers.

This is the fifth f/1.8 prime in the Z-mount range, though it's perhaps puzzlingly close to the existing 24mm lens. Get a wide angle view on stunning vistas with this perfect landscape photography lens.

The 14-30mm is a super-wide-angle zoom that's ideal for landscape, architectural and indoor photography. And, uncharacteristically for a lens of this type, it can be used with a front-mounted filter, making it even more versatile.

The first zoom lens released for the Nikon Z cameras, this is also the one most commonly sold in kits if you buy a Z6 or Z7 body. It's much slower than its f/2.8 sibling, but its compact size and optical performance make it a great alternative.

This is the first superzoom lens for the Nikon Z system – allowing you to tackle most subjects with just the one lens, making it ideal for traveling. It is a full-frame lens for use with the Z6 and Z7, but also features VR image stabilization making it a great partner for the Z50 too (where it will have an effective focal length of 36-300mm). While the lens is technically out now, you might have some trouble getting your hands on it as there seem to be limited batches. Your best bet is pre-ordering it and waiting for your order to be fulfilled.

With the arrival of the Nikon Z50, which employs a smaller APS-C sensor, Nikon has deployed a line of DX lenses for its Z-mount system. This marks a pronounced departure from Canon's RF mount strategy, which is exclusively full frame. However, it enables Nikon to produce smaller and lighter cameras with suitably compact lenses that take advantage of the Z mount's benefits.

Obviously this kit lens is designed specifically for the Z50, but it's fair to say that it absolutely makes Nikon's compact new camera. Its collapsible pancake design fits an equivalent 24-75mm focal range literally in the palm of your hand.

Likewise designed for the Nikon Z50's DX sensor, this discreet telephoto zoom lens gives an equivalent full-frame focal length of 75-375mm, and is often sold as part of a twin lens kit with the Z50.

Originally promised for 2019, then promised for February 2020, and now set for a late August release, the Nikkor Z 70-200mm f/2.8 S will be a must-have lens for any pro. This fast-aperture telephoto is a workhorse for weddings, news, and sports – and many pros are arguably holding off moving to the Z system until this is ready.

A faster 50mm prime lens, this will be welcomed by documentary and street photographers looking for superior low light performance and shallower depth of field rendition.

While Canon fast-tracked its RF mount trinity lenses to encourage adoption by pros, Nikon has dragged its heels somewhat. After the 70-200mm, this will complete the trifecta of f/2.8 pro zooms for the Z system.

Other lenses on the Nikon Z lens roadmap that the manufacturer has promised for release by 2021 are as follows:

A number of major and minor third-party manufacturers have announced lenses for the Nikon Z mount. Here are a selection of non-Nikon lenses that are on the market or on the horizon…

The Laowa 15mm f/2 Zero-D is a fantastic optic, offering an ultra wide-angle lens with a fast f/2 aperture and an affordable price – making it a bit of a unicorn lens for architectural and landscape photographers. And for videographers, the ability to de-click the aperture by sliding a switch makes this an essential lens for shooting wide. It's all-manual, but the image quality and distortion control are both impressive.

Unless you want to spend eight grand on the Noct, this is currently the fastest prime lens you can buy for the Nikon Z6 or Z7. Its manual focus might put some people off, but a classic portrait lens with an f/1.4 aperture is music to the ears of those who enjoy shooting portraiture.