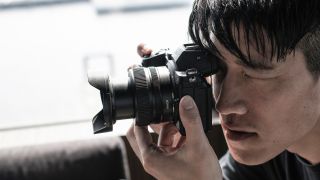 Launching alongside (and bundled with) the Nikon Z5 is the new Nikon Z 24-50mm f/4-6.3 kit lens – which Nikon is calling "the shortest and lightest full-frame mirrorless zoom lens around".

Sometimes, it's the little things that seal the deal. The free AirPods, that make it worth upgrading to the new iPhone. That special dessert, that makes it worth going to a particular restaurant. And the Big N is certainly hoping that the Nikon Z 24-50mm f/4-6.3 does for the Nikon Z5 what the Nikkor Z DX 16-50mm f/3.5-6.3 VR pancake lens did for the Nikon Z50.

That pancake transformed the Z50 from an interesting camera to a truly covetable and pocket-friendly purchase. And while the new 24-50mm f/4-6.3 isn't quite as pocketable, or as wide in terms of focal length, it's still impressively compact at just 195g. Both share a f/6.3 maximum aperture at the long end of the zoom range, which is slow, even for kit lenses, but is mitigated by the excellent ISO performance of the Z series.

Nikon hopes that its portable size (which barely extends beyond the camera’s grip when retracted) and "do-everything" focal range will make the Z5 bundle irresistible to hobbyists and enthusiasts who are looking to upgrade to or invest in a full-frame camera system for the first time, and who may have little experience with or budget for additional lenses.

Indeed, for many smartphone shooters – which is one of the groups Nikon is hoping to attract – the idea of an interchangeable lens camera can be daunting, so the idea is to give them a compact all-in-one lens that can replace their phones without adding too much bulk.

Of course, with the best camera phones offering up to 100x zoom (albeit with questionable results), the 2x zoom of this new lens is comparatively humble. However, with one ED lens and one aspherical element to minimize distortion, and with a focus ring that doubles as a customizable control ring that can be used for exposure functions, prospective users will obviously experience the benefits of a dedicated photographic tool.