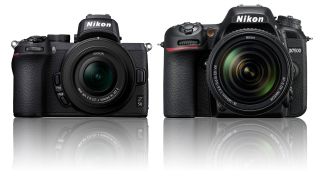 This Nikon Z 50 vs D7500 comparison might look like it has an obvious winner; the Z 50 is newer, smaller, lighter and has a faster continuous shooting speed than the D7500, which has been around since 2017. It’s also a battle between mirrorless vs DSLR cameras, which many people imagine has already been won by mirrorless cameras. But let’s not be too hasty, because there’s more to this than meets the eye.

The Nikon Z 50 is Nikon’s first APS-C mirrorless camera. It uses the same Nikkor Z lens mount as the existing full frame Nikon mirrorless cameras, the Nikon Z 6 and Z 7, but a smaller APS-C sensor – or to use Nikon’s term, a ‘DX’ sensor.

But the main decision for Nikon owners isn’t really between the Nikon Z 50 and the full frame models, but DSLR versus mirrorless. Nikon is aiming the Z 50 at exactly the same user level as its own Nikon D7500 DSLR, so how do these two cameras compare, and which should you buy?

Both cameras have 20.9-megapixel APS-C CMOS sensors, but despite the apparent similarities, these are not the same. The newer Nikon Z 50 has on-sensor phase detection autofocus, which the older sensor in the D7500 does not. The Z 50 also has a newer-generation EXPEED 6 processor, where the D7500 has EXPEED 5. The advantage of a faster processor usually shows in increased continuous shooting speed and, sometimes, improved image quality especially at higher ISOs. No clear winner yet.

Interesting, although it’s an older camera with a previous-generation sensor, the D7500 has a wider maximum ISO range. Both cameras offer ISO 100-51,200 in their standard range, but while the Z 50 offers ISO expansion up to ISO 204,800, the older D7500 goes all the way up to ISO 1,640,000 in expanded mode! That sky-high ISO may not be quite as practical as it sounds, however, as our past experience has been that Nikon’s ultra-high ISO settings delivery image quality that simply may not be acceptable except in dire emergencies. Still, that’s a technical point in favour of the D7500.

Here, the differences between these two cameras are profound, and which you prefer will depend on the kind of viewfinder you like. The D7500, being a DSLR, offers an optical viewfinder which gives you a lag-free ‘naked eye’ view of the scene but does not simulate camera settings like white balance and exposure. The Z 50’s 2.36 million DOT EVF does both of these things… but it’s worth pointing out that even EVFs offer only a ‘simulation’ of what the sensor will record, especially if you shoot raw files, and EVFs are suspectible to lag in low light and burst shooting. The D7500 wins for clarity, the Z 50 for accuracy – it’s pretty even and dependent on user preference.

Both cameras have 3.2-inch tilting touchscreen displays which are usefull larger than the 3-inch screens on most cameras. There are differences, though. The Z 50’s rear screen has a slightly higher resolution of 1.04 million dots, versus 922k dots on the D7500, and it flips through a full 180 degrees (downwards) to face forward. This makes the Z 50 perfectly adapted to selfies and vlogging and the newly emerging ‘influencer’ market which was still in its infancy when the D7500 was designed. The Z 50 wins, especially for selfies and vlogging.

The Nikon D7500, like all DSLRs, effectively has two autofocus systems. For viewfinder photography it uses Nikon’s tried and trusted 51-point phase Multi-CAM 3500 AF sensor, widely regarded as one of the best around, certainly at this price point, both for stills and for continuous shooting. In live view, however, this sensor is disabled and the D7500 switches to a much slower sensor-based contrast AF system, which hampers its performance for stills and video. The Z 50 autofocus system has 209 on-sensor phase detection points and it makes no difference to the performance whether you use the viewfinder or the rear screen. It’s not yet clear whether it can match the D7500’s viewfinder AF performance, but it’s streets ahead for live view and video. All round, the Z 50 wins for autofocus.

Despite their different autofocus technologies, the Z 50 and D7500 mostly share the same autofocus modes, including auto area AF, single point AF and dynamic area AF. The Z 50 adds the latest eye detection, wide-area AF and pinpoint AF, but does not have the same 3D tracking and group area AF modes of the D7500. The D7500 may yet prove to have the edge for moving subjects, but the Z 50 offers a wider choice of everyday AF options.

You might expect these cameras to have the same shutters, but they don’t. They do both use mechanical focal plane shutters, that much is correct, but the D7500 offers a higher maximum shutter speed (1/8000sec versus 1/4000sec for the Z 50), while the Z 50 offers a higher maximum frame rate. Flash shooters might like to know that the D7500 has a slightly higher flash sync speed too, of 1/250sec versus 1/200sec in the Z 50. The honors are even – the Z 50 has a higher frame rate, the D7500 offers faster speeds.

One of the Nikon Z 50’s headline selling points is its ability to maintain a continuous shooting speed of 11fps, whereas the D7500 lags a little behind at 8fps – though that’s still pretty fast for a mid-range DSLR. Nikon was no doubt carefully positioning the D7500 against the more expensive D500 and its 10fps continuous shooting speed. But the frame rate is only part of the equation –  the buffer capacity is just as important and perhaps more so. This governs the number of frames the camera can capture before it starts slowing down. The D7500 has a buffer capacity of 50-100 Raw files (depending on the bit depth/compression setting) or 100 JPEGs. That’s very good for a camera in this class, especially for Raw capture. We have not yet been able to find out the Z 50’s buffer capacity, and probably won’t until the official manual is released. If it gets close to the D7500’s buffer capacity, that makes the Z 50 the winner; if it doesn’t, it’s a black mark and the D7500 gets it.

Both cameras capture uncropped 4K UHD video at up to 30fps. The D7500 was ahead of its time to offer this in a camera in its class, and its video specs look good even now. If you drill down far enough into the details you might find developments and improvements that aid the Z 50, but the newer camera’s main advantage is its far more effective autofocus for video. It can also capture full HD at up to 120fps (the D7500 stops at 60fps). The Z 50 wins purely for its better autofocus and front-facing screen.

If you want to stop a mirrorless zealot dead in their tracks, just use the ‘B’ word – batteries. You’ll get all sorts of hemming and hawing and complaints about the CIPA battery life testing process, but the bald fact is that the Z 50 can manage 300 shots on a single charge and the D7500 can take 950. You don’t have to be a maths genius to figure that’s more than three times the number of shots. Using a DSLR like the D7500 is a fundamentally different experience because you make sure it’s fully charged before you go out for the day and then forget about it; with the Z 50 and mirrorless cameras like it, it, you’d better take a spare battery (or two), or take a portable power bank and expect to take a couple of hours out for lunch while it tops up the camera’s battery. That’s a clear and definite win for the D7500.

The Nikon Z 50 is a lot smaller than the D7500. It’s not just that the mirrorless design is inherently more compact than a DSLR’s, but that Nikon has gone to great lengths to make the Z 50 as compact as possible. It’s to the company’s credit that it’s achieved this while still making the Z 50 grippable and satisying to use. So that’s a clear win for the Z 50, then… except that a small camera is not always what you want. If you have big hands, you use bigger lenses or you like external controls not touchscreens, the D7500 might actually be (gasp, sacrilege!)... better. If you like small cameras, the Z 50 is better; if you don’t, it isn’t.

At 450g, the Nikon Z 50 is substantially lighter than the 720g Nikon D7500. Nobody likes carrying around weight they don’t need to, so that’s another clear win for the Z 50… up to a point. Cameras also need lenses. In fact, the lenses you carry around with you will have far more impact on the weight of your bag than the camera. The Z 50’s two native DX Nikkor Z lenses are both very light, reinforcing the weight savings. Future lenses may not be, and if you use the FTZ adaptor and your existing Nikkor DSLR lenses, the advantage is gone. The Z 50 is a clear winner on paper, though in practice the weight advantage may be smaller than it appears.

It’s become increasingly popular to judge cameras on the measuring tape and the numbers. On that basis alone, the new Nikon Z 50 is superior to the older Nikon D7500 DSLR in just about every way. The danger is in assuming you can easily measure everything that matters and that we all like the same thing.

So the Nikon Z 50 is smaller, lighter, faster and – for now – cheaper than the older D7500. It drops ‘old’ DSLR technology in favor of a more compact, modern, digital viewing system. It is, as mirrorless fans would have it, the future.

But hold on a minute. The D7500 is bigger, heftier, balances better with bigger lenses and has a far wider ‘native’ lens choice. It has an optical viewfinder, which many prefer, and a far better battery life. Sometimes it’s worth accepting a bigger camera to get a better shooting experience.

So our verdict is not just based on specifications. In this respect, the Nikon Z 50 and D7500 are quite closely matched. The real deciding factor is which type of camera you prefer to use. The D7500 cannot compete with the size, weight and continuous shooting speed of the Nikon Z 50: fact. But if you want a strong, hefty camera that balances well with big lenses and can shoot all day on a single charge, can the Z 50 really compete with the D7500?

In the end, you have to try both and choose the one you like using.