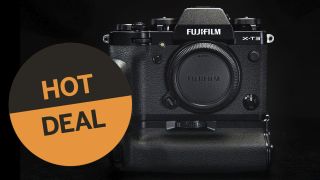 Just in case you hadn't spotted it, the Black Friday camera deals have arrived very early this year. With the sales now in full swing, we have been spotting some great offers... but they don't come much better than the ones announced by Fujifilm this morning. The big news is that you can get double cashback on four of its key cameras - doubling the amount you can get back direct from Fujifilm in its winter cashback scheme.

This means there are now some ever-so-tempting deals on the X-T3, the X-T30, and X-Pro2 mirrorless cameras... and also a lovely looking deal on the X100F premium compact camera.

Which is best? Well it will depend what you want... but in pure value terms the Fujifilm X-T3 deal is going to be very hard to beat. After you take the whopping £180 cashback you get now, you are paying just £999 for the flagship mirrorless model. But on top of this you will get a VPB-XT3 Vertical Power Booster Grip worth £299 thrown in for free. Now that's like getting all your Christmases arriving at once!

Fujifilm X-T3, £999 after £180 double cashback and includes VPB-XT3 Vertical Power Booster Grip worth £299!
The Fujifilm X-T3 is Fujifilm's flagship X-mount model and holds its price extremely well, and this is the first time we've ever seen it below £1,000 – and this deal includes the £299 battery grip!
UK dealView Deal

Fujifilm X-T30 body, an amazing £694 after £150 double cashback!
If the Fujifilm X-T3 is more than you need, you can get the same sensor and AF system in the much smaller X-T30, and at a double-cashback Black Friday price we never expected to see!
UK dealView Deal

Fujifilm X-Pro2 body, just £799 after £360 double cashback!
The X-Pro2 has just been superseded by the slightly more advanced X-Pro3, but this double cashback deal brings the classic X-Pro2 way lower in price than we've ever seen before. If you want to try Fujifilm's unique hybrid EVF and X-mount rangefinder design, now's your chance!
UK dealView Deal