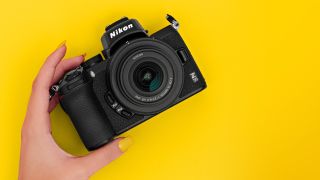 Looking for the best Nikon Z50 deals available right now? Then you are in the right place as we have all the up-to-date prices to help you find yourself a bargain. The Nikon Z50 is the third of Nikon's Z family of mirrorless system cameras. But unlike the Nikon Z6 and Nikon Z7, the Z50 does not have a full-frame image sensor – instead it uses a smaller APS-C CMOS sensor - similar to that found in Nikon's DX-format DSLRs.

The smaller sensor means that you get a smaller and affordable camera – but one that can use the large-aperture Z mount lenses used by its older, more expensive brothers. But it can also use some smaller lenses to create a highly portable package - such as the Nikkor Z DX 16-50mm f/3.5-6.3 VR and Nikkor Z DX 50-250mm f/4.5-6.3 VR that come in with the attractively-priced twin-lens kit version of the Z50. The camera can also be used with older-generation Nikon F-mount lenses via the optional Nikon FTZ adaptor.

The Nikon Z50 is small, but it has been deliberately designed so that it is still easily to hold, and to use like a true enthusiast camera. There is a decent-sized grip, for instance, meaning that you can hold it firmly in your right hand without the feeling that you might drop it. And there is a high-quality 2.36 million electronic  viewfinder - so you can use the camera at eyelevel and see what you are shooting (and have shot) at eyelevel in all lighting conditions. This is coupled with a 3-inch tilting LCD screen, that can be used to take low-angle shots, or even shots from above your head. Crucially for vloggers (and selfie lovers) the screen can be tilted to face forwards - so you can keep yourself in shot as you record.

The stills side of the camera delivers 20 megapixel images - and can shoot these at up to 11 frames per second. There is no buit-in stabilization - but as many of the lenses available have Vibration Reduction this is not a major issue. There is however electronic stabilization provided when shooting video, which can be recorded at an impressive 4K resolution without any cropping issues.

When comparing the prices for the Nikon Z50 you need to weigh up the relative merits of the different lens options available. You can find the camera available in 'body only' form - or with an FTZ mount adaptor, so that you can use you Nikon SLR lenses with the Z-mount camera. However, the best-priced options are usually those with either one or two of the Nikon Z DX zooms specifically made for the Z50; although the most expensive option, the twin-lens kit is a particularly good deal if you want an all-in-one starter system.

Round up of today's best deals
Nikon Nikon Z50 Mirrorless...
Nikon Z50
Adorama
$719
View Deal
See all prices
We check over 130 million products every day for the best prices
View All Deals
powered by