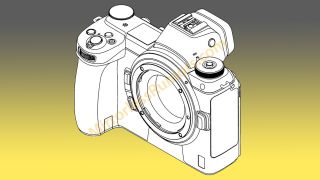 A new patent registration has revealed the design of another upcoming Nikon Z-series camera, which could be the Nikon Z8 or Nikon Z9 – but seems likelier to be the former.

The new design features a significantly larger body that is substantially chunkier than the existing Nikon Z cameras, though it appears to possess the same button layout and configuration.

Interestingly, the new beefier grip – much like the optional Nikon MB-N10 battery grip for the Nikon Z7 and Z6 – does not accommodate portrait shooting with an integrated secondary shutter button, joystick or exposure dial.

This would be a glaring omission for a dedicated professional body, which leads us to believe that this design is for the Nikon Z8 – which is expected to be high-resolution camera featuring the same 61-megapixel sensor found in the recently announced Sony A7R IV.

Since the Nikon Z9 is expected to be a mirrorless upgrade of the Nikon D5, designed to for heavy professional use and capturing fast action such as sport, it would be a major oversight for the design not to incorporate vertical shooting.

Mirrorless Rumors, which uncovered the patent, nonetheless believes this is the Z9. However, its reasoning – that "a bigger body would allow better heat dissipation for professional video recording and also faster frame rate" – actually better supports the theory that this is the Z8.

Heat dissipation would likely be a far bigger issue with the 61MP sensor – particularly if the Nikon Z8 becomes the latest camera to support 6K video shooting, following the lead of the Panasonic S1H, the Blackmagic Pocket Cinema Camera 6K and the Red Komodo.

Whatever the reason, and whichever model it turns out to be, you can see how much larger the new design is in the images with a dark grey body – these illustrate the size of the new camera compared with the smaller existing Z models (in grey).

There was talk that Nikon could announce its next Z camera by the end of the summer, so we should find out soon what its plans are – especially with the Tokyo Olympics creeping ever closer.