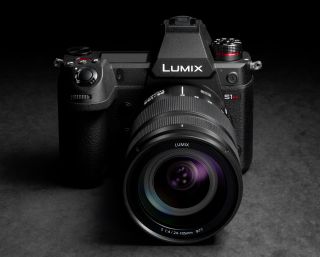 Panasonic has launched a 6K video variant of its Lumix S full frame mirrorless camera – and with a resolution and specification that leaves rival mirrorless cameras from Sony, Nikon and Canon trailing in its wake.

Panasonic was late to the full frame mirrorless party with its Lumix S cameras, but as we first reported two days ago, it has made up for it with the Lumix S1H and its headline spec: 6K video. This immediately gives it a clear advantage over the best 4K cameras you can get right now.

Panasonic chose the influential Hollywood Cine Gear Expo to launch the Lumix S1H, an event that has been taking place annually since 1996 and covers digital media, film, entertainment and post production. It’s the largest event of its kind in the US.

Panasonic has a history of launching high-powered broadcast video cameras alongside its regular mirrorless models, so we shouldn't be surprised that it's done the same here. So while the new Lumix S1H is specialised and expensive, its price tag will be no deterrent to professional videographers and filmmakers hungry for the next big technological breakthrough. It also makes a perfect third member of the Lumix S range, joining the 47-megapixel Lumix S1R and the more affordable Lumix S1 – which will also ge major new video features via an imminent firmware upgrade (see below).

Perhaps the most unexpected news is the price. The Lumix S1H will sell for around $4,000 body only. The official UK price has yet to be announced, but we would expect it to be around £4,000. This is about $1,000 less than many were expecting and makes the Lumix S1H an even more compelling option for professional videographers and filmmakers.

If there is a catch, it's that this is an announcement of the Lumix S1H's development, not its actual availability. We've yet to receive official word on when it will actually be available to buy, except that it will be 'this autumn'.

For some, the next big step forward in video is 8K, but this is pie-in-the-sky tech that’s yet to reach the mainstream. We understand the Sharp 8K video camera is already in the hands of professional testers, and we’ve been told by Panasonic that it’s close to delivering an 8K camera, but the new S1H is a product that’s coming here and now, and while 6K might sound like an interim resolution, it’s much bigger than it sounds – in every sense.

Let’s take a proper look at that 6K resolution. Current 4K video cameras offer a resolution of 3,840 x 2,160 pixels in the UHD standard (Cinema 4K, offered by some cameras, is slightly wider at 4,096 pixels). The 6K video mode on the S1H however, captures video with a horizontal resolution 50% higher than 4K – which means roughly 2.25x the megapixels (depending on the aspect ratio chosen).

The illustration below shows graphically how much larger 6K video frames are than 4K and full HD.

In its live feed product announcement Panasonic showed a demo by professional film maker Alicia Robbins, showing the dynamic range capabilities of the S1H, its low light, high-sensitivity performance and its exposure latitude and Robbins pointed out its advantages for 'punching in' (zooming in) on a subject and for post production image stabilisation.

Not everyone will need or use the full 6K resolution for playback, but the extra image data offers a lot of leeway for post-production zooming, cropping and downsampling to 4K resolution (who thought we'd ever be 'downsampling' to 4K!).

It's not just about the resolution

The Lumix S1H can capture 6K video at 24p in a 3:2 aspect ratio, 5.9k 16:9 video a 30p and anamorphic 4:3 video (where images are captured in a horizontally 'squashed' and stretched back out for playback). It's made possible by its multi-aspect design, a system Panasonic has used on its smaller Micro Four Thirds models. It can also capture regular 4K at up to 60p, just like its S1 and S1R stablemates.

That's not all. Its professional video credentials are boosted by in-built V-Log/V-Gamut with a wide dynamic range of 14+ stops that's compatible with the Cinema VariCam look of Panasonic's broadcast-quality camcorders, and unlimited video recording (subject to operating temperature).

At the same product announcement, Panasonic revealed that the Lumix S1 would get a 'software upgrade key' bringing major new video capabilities to its 24-megapixel Lumix model. This will cement this camera's positioning as not just a lower cost alternative to the 47-megapixel S1R but a better tool for video (in much the same way as the Nikon Z 6 is more video-centric than the Z 7).

Upgraders will also get a WFM (Waveform Monitor) which displays the brightness level while recording and high-res 48-kHz/24-bit or 96-kHz/24-bit sound that can be recorded in the MOV format using the XLR Microphone Adaptor DMW-XLR1.

The best news is that existing Lumix S1 owners will get the upgrade free of charge by redemption from 8th July 2019 and new users will get the update free up until 30th September. From 1st October 2019 the key will be sold at £179.00.