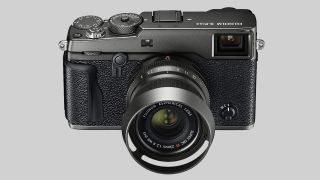 The highly anticipated Fujifilm X-Pro3 could be set to feature a tilting touchscreen, if the latest chatter from the rumor mill is true.

The addition of a tilting screen on the successor to the X-Pro2 would be quite welcome – though it would also be quite the departure for the company's line of rangefinder cameras, which have traditionally adhered to a different design ethos than its SLR-style cameras (like the Fujifilm X-T3 and Fujifilm X-T30).

"Fujifilm has repeatedly said over the years, that a tilt screen does not fit with their philosophy for Fujifilm’s X series rangefinder line (X-Pro, X100 and X-E)," notes Fuji Rumors.

However, the site has nonetheless reported that the new camera will feature a tilting screen – something that's becoming more and more an expectation in the current-day camera market.

Rumblings about the Fujifilm X-Pro3 have been increasing recently, including last month when a Bluetooth registration apparently outed the camera (under the product name FF190002).

We wrote at the time that the X-Pro3 was rumored to be announced in October – something that is reinforced by a new story from Mirrorless Rumors, which reports that "Fuji will launch the new X-Pro3 in September/October".

Aside from the tilting screen, no other specifications have been leaked – though we think it's a given that it will feature Fujifilm's new 26-megapixel X-Trans sensor (over its predecessor's 24MP version).

More than just providing a bump in resolution, this will improve the autofocus performance thanks to its increased number of phase detect AF points and wider coverage, as well as boosting the camera's video capability and image processing.

Broadly speaking, we'd expect the same kinds of enhancements that were presented by the recent upgrades from the X-T2 to X-T3 and the X-T20 to X-T30. Hopefully the tilting screen is among them…