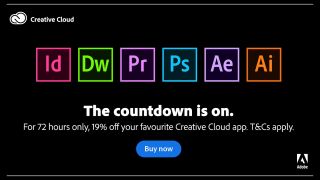 Adobe has just told us that it is running a flash sale on Creative Cloud Single Apps for over the next three days. The discount allows you to buy your favorite Adobe application at just £16.18, rather than the usual £19.99. The 20% saving is available in the UK andEurope until Monday 27 January (11pm GMT).

The Single App scheme is particularly attractive to those who just want one program - and who wouldn't benefit from Adobe's "all you can eat" All Apps plan which typically costs £49.94. That means for vloggers and filmmakers who want the industry-standard professional video editing software, you can just subscribe to getting Premiere Pro - without paying for apps that you just won't use.

Adobe Creative Cloud Single App - save 19%
This 72-hour sale is on a subscription to just one of Adobe's creative apps - which are reduced to £16.18 a month (usually £19.97). As well as Premiere Pro, this discount can be had on other Adobe applications including InDesign, Dreamweaver, After Effects, Illustrator.
Offer ends: midnight 27 January (11pm GMT)
Valid in: UK, Europe
View Deal

Although Photoshop CC is available under the Single Apps scheme, photographers are better off buying the Creative Cloud Photography Plan that costs £9.98 a month, and which gives you both Lightroom and Photoshop in the subscription deal.