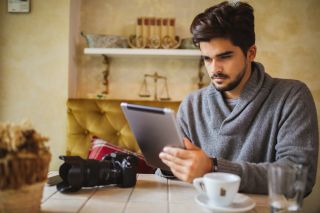 How do you choose the best tablet for photo editing? A touchscreen tablet has become an almost essential accessory for the photographer nowadays; it's a mini computer you can slot into your camera bag to get onto the internet, show your portfolio, and tweak your images. But the choice is not as easy as it was. Once upon a time an iPad was the default choice, but now not only do we have the likes of Microsoft's mighty Surface line that offer extra functionality, and there are decent low-cost options such as the Amazon Fire.

So the best tablets for photo editing are no longer simply the best iPads, but now stray into best laptops for photographers territory as well. Just look at the new MacBook-rivalling Microsoft Surface Book 3, which the manufacturer actually calls its "most powerful laptop ever".

Which is confusing, but fair. After all, if all you want is a mobile portfolio to show off your photographs, then the best camera phones now pack sufficiently large screens to do the job that tablets once did.

Nowadays, the best tablets need more horsepower and the ability to accommodate styluses and keyboards. Indeed, many tablets are now powerful enough to run some of the best photo editing software around.

Which not only means that you can keep your desktop workflow going when you're on the move, it also means you can make your working from home setup more flexible during the lockdown. There are times when reclining on the couch with a tablet is far more appealing than being hunched over your desk or balancing a laptop on a tray!

There's a number of features that make a tablet highly suited to photo editing, for example, how big is the screen and what's the resolution. You want to make sure that if you're using a tablet to show off your work, the screen and color accuracy does it justice.

Other things to consider are the battery life - will it last all day without charge? How much does it weigh and will it fit nicely in your camera bag? Finally, and probably most important of all, is whether the device you like can power your favorite photo editing software comfortably. Here you'll find the answer to all of these questions to help you make the most informed decision.

Read on for our pick of the best tablets for photo editing and photographers, which includes options for iPad, iOS, Android and Windows users alike.

This is the best Windows tablet money can buy!

If you're in the market for a tablet running Microsoft's OS, you'll be hard pushed to beat the Surface Pro 7. Featuring the processing power of a laptop, a beautiful 12.3-inch PixelSense display and a longer battery life than many, the Surface Pro is, without a doubt, one of the best tablets for photo editing.

But what really sets the Surface Pro apart is its functionality. The device features the latest multicore processors, which means you're not limited to mobile versions of anything, including the operating system. The Pro 7 is able to run the full Windows OS and, perhaps more importantly, the full version of your favorite photo editing software too.

The Surface Pro 7 also has a dedicated full-size illuminated keyboard, touchpad and precise pressure-sensitive stylus (all sold separately) – the combined package providing photographers with everything they need for high-precision photo editing.

It's a photo editing powerhouse and best iPad for photographers

Apple has some of most powerful tablets on the market – and topping its tablet charts is the juiced-up iPad Pro. In general, as tablets go, this one is hard to beat when you take into account its big beautiful screen, portable and stylish design, useful peripherals and iOS running on Apple’s A12X Bionic chipset. But does that make it one of the best tablets for photo editing?

The answer is, quite simply, yes. The Pro offers an attractive combination of high power and portability, which can run Lightroom CC Mobile without issue (and no doubt the upcoming Photoshop CC for iPad).

The luxury Retina LCD screen is one of the biggest on the tablet market – a whopping 12.9 inches – offering a crystal clear viewing experience and an excellent surface to draw on with the Apple Pencil (sold separately). The downside with the iPad Pro is the price. It doesn't come cheap so anyone thinking of investing would almost certainly be thinking of this as a laptop replacement. And if that's the case, be prepared to shell out extra for accessories.

If you're one of the millions of people across the globe who favors Android's OS, you'll want to take a closer look at the Samsung Galaxy Tab S6. Weighing in at just 420 grams, this is one of the lightest, most portable tablets on the market. But don't be fooled by its appearance, this lightweight device features enough power to handle precision photo editing on the go.

The S6 is equipped with desktop-like software, up to 8GB of internal memory and 256GB of internal storage (expandable via MicroSD cards), so plenty of space for uploading images. Under the hood the S6 is powered by a Snapdragon 855  processor, meaning it can handle photo editing software (including Lightroom and Photoshop Express) with ease.

The S6's 10.5-inch HDR-ready Super AMOLED display makes viewing imagery a pleasure, and unlike with Microsoft or Apple devices, the S Pen is included in the purchase price. The S4 also features a larger batter capacity (7,050mAh), meaning it can last up to 15 hours on one charge, and be back to full force in as little as 200 minutes with fast charging.

This is an older version of the Galaxy Tab range - but just because it has been surpassed with the introduction of the Galaxy Tab S6 (see above), it doesn't mean it is that much less capable of being your digital assistant and photo editing friend when out an about on location. A great budget buy, now that prices have fallen.

A great all-rounder and a good value iPad for photographers

If you're an Apple fan but can't (or don't want to) shell out for the iPad Pro, Apple's all-new iPad Air is a more affordable but still highly capable option. A lot of attention has gone into this new model, powered by Apple's A12 chip, it's less powerful than it's older sibling, but still packs enough of a punch to be able to run photo editing software comfortably.

In fact, the processing power and RAM is really quite impressive when you consider it's working in a device that weighs less than half a kilo and is just 6mm thick. There is, as you would expect, less RAM in the Air, but still a respectable 3GB to play. The 2019 iPad Air also includes support for the Apple Pencil (first generation only), which will be music to many a photographers ears.

The cheapest tablet on our list by a mile, the Amazon Fire HD 10 is a fantastic option if you want a portable device for light photo editing work. Its 10.1-inch full HD screen is more than adequate for showcasing work and its highly portable, weighing in at just 500g.

The Fire HD 10 is available as a 32GB or 64GB version, both of which have a microSD card slot to expand memory up to 256GB should you need it, and the battery life is said to last up to 10 hours after one full charge.

Very much part of the Amazon eco-system, the Fire HD 10 helpfully has Amazon’s Alexa voice-assistant onboard, however it does mean using the FireHD for anything outside of that system – Google apps, for example – isn't possible. That said, the ever-growing Amazon app store presents a number of lightweight photo editing apps so you won't be short on software. A basic but capable option for anyone wanting a device for light editing work on the go.

It's like getting a pro tablet, but without the pro price tag

If you prefer to work with the Windows OS and on a budget, Microsoft's Surface Go is the less powerful but still very capable alternative to the Surface Pro 6 we mentioned earlier. With less power comes slightly less functionality and reduced performance, however the Surface Go has enough weight behind it to handle light photo editing work comfortably.

Unlike its bigger sibling, the Surface Go runs the locked down 10 S version of Windows, but also offers the option to switch to the full version for free. And by doing so, the Go offers the functionality of a standard PC, including running photo editing software, anywhere and everywhere.

Its size makes this the perfect travel companion for photographers

Ok so we know that makes three iPads in this list, but each of these devices offer something slightly different and therefore all are worth consideration when choosing the best tablet for photo editing.

The latest iPad Mini is a top option if you spend a lot of time traveling. The lightest device on this list, the Mini weighs just under 300g, meaning it will fit in almost any camera bag and you'd barely notice its there.

The cheapest iPad option on the list, it also has the smallest screen size of all the tablets we've mentioned – but what a small but beautiful display it is. There's enough power in the Mini to run the mobile version of Lightroom comfortably and, like the iPad Air, new added support for the Apple Pencil makes the Mini a tablet well worth considering.