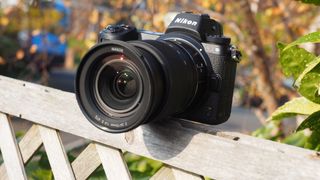 Nikon introduced its long anticipated full frame mirrorless camera system in late 2018, but surprised us all when it transpired to be not just the one camera on launch, but two: the Nikon Z6 and Z7.

There’s the danger that the Z6 could have been overshadowed from the outset by its bigger brother in the Z7; thankfully that’s not the case, as the Z6 is not only more affordable but very versatile with it. And if you are looking for a best buy on this capable camera you have come to the right place, as give a round up of its capabilities and  the best deals available today.

It is also worth considering the more recent Nikon Z5 too, which is about to go on sale which is designed for more of a mass market than the Z6

The Nikon Z6 offers the lower resolution of the two cameras in 24.5 megapixels (as opposed to the Z7’s 45.7 megapixel sensor) and not quite as many AF points as its pricier sibling. However it is less than two thirds the price, offers a broader ISO range, full frame 4K video without any crop factor, plus a swifter continuous shooting rate of 12fps (as opposed to 9fps).

Below we round up some more of the Nikon Z6’s essential features to help you confirm that it’s the right camera for you. You’ll also find the best current prices for this brand’s most approachable full frame sensor mirrorless camera yet, which will please even the fussiest yet budget conscious photo enthusiast.

For those existing Nikon DSLR and lens owners wanting to jump aboard its new mirrorless system, or utilize it alongside that very same DSLR, the Nikon Z6 currently offers the best deal. Yes the Nikon Z cameras feature a new lens mount, but the manufacturer is also selling an FTZ mount adaptor allowing purchasers to use their existing Nikon lenses, plus there are three dedicated Z mount lenses currently available at the time of writing.

If you’re eyeing this one up over the Nikon Z 7, be aware that although it’s cheaper there thankfully don’t appear to have been corners cut in terms of construction. It has an extensively weather-sealed, magnesium alloy body, plus a respectable 200,000 shot shutter duration. In short, externally you can barely tell the Z6 and Z7 apart.

If you’re someone who takes pictures regularly in low light, another plus is that the Z6’s body has built-in anti shake, so you don’t specifically need to invest in Nikon’s VR equipped lenses. Continuous shooting speed impresses too, allowing for captures of up to 12fps. These are written to Nikon’s solitary choice of media: the XQD memory card, so you’ll likewise want to grab the best deal on one of those.

A 310-shot battery life for the Z6’s may here seem modest, but it’s comparable with many cameras in the mirrorless market. Overall it feels like the Nikon Z6 is a slimmed down mirrorless version of the same manufacturer’s D750. Users therefore making the leap over to this fledgling system will find it welcoming.

The rear screen on the Nikon Z6 is rather good, though it’s a shame that it only offers a vertical tilt mechanism rather than a full vari-angle screen like the competing Canon EOS R, also a full frame sensor incorporating mirrorless camera for enthusiasts.

• The best Nikon Z lenses for the Z6

That said, we found it works just fine for regular horizontal format photography, while the high 2,100K-dot resolution panel is both smooth and sharp in terms of visibility. The camera’s focus point can be set and the shutter fired by tapping the screen, while the eye-level electronic viewfinder also impresses as an alternative to using the larger LCD screen.

So, with the above in mind and without further ado, make sure to check out the best deals we’ve currently found on the Nikon Z6 below…

Round up of today's best deals
Nikon Z6 Full Frame...
Nikon Z6
Amazon
$1,796.95
View Deal
See all prices
We check over 130 million products every day for the best prices
View All Deals
powered by