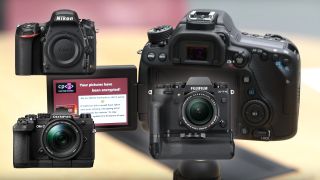 Very sadly, this week's camera news was dominated by the passing of a true photographic legend: the inimitable Terry O'Neill, who died at the age of 81. A real original, and a wonderful man, we felt the best way to remember him is in his own words, and below you will find a link to our last interview with him.

The week's other headlines were more upbeat, with the first rumors hitting of the Fujifilm X-T4 and a fresh crop of speculative specs for the Nikon D750 replacement.

After some very pessimistic rumors, we also got the great news that Olympus is not selling its imaging unit. And Canon has finally released a new slate of firmware updates for ten cameras affected by its widespread malware vulnerability.

The previous model is barely over a year old, but rumors are already flying about the Fujifilm X-T4 – and, while they must be taken with the biggest pinch of salt that your fingers can manage, it is reported to be a 6K powerhouse that could rival the Panasonic S1H.

If the rumblings are true, the Fujifilm X-T4 will shoot 6K video at 60 frames per second with 10-bit internal recording and an anamorphic ratio. It will also possess in-body image stabilization, which will result in the body being approximately a third of an inch thicker and 140g heavier than the X-T3.

Fittingly, for a cinema camera, it will also feature a fully articulating touchscreen, and it will be released towards the end of 2020 – which certainly fits the X-T line’s biannual release cycle…

An updated set of rumored specifications have made their way online for the Nikon D780 replacement – which we have taken to calling the Nikon D780, though that may not be the case according to these leaks!

The D750 successor could apparently be called the Nikon D770 or Nikon D790 (even if, for reasons explained below, we think D780 makes more sense). It will reportedly have a 24MP BSI improved sensor, with an articulated TFT LCD tilting touchscreen that's 3.2 inches with 2.1 millions dots.

It is also set to have both a significantly improved processor compared to the original D750, along with a much increased framerate for RAW shooting…

Olympus NOT selling its camera business

Rumors began swirling earlier this year that Olympus Corporation was considering the sale of its imaging business. While this was denied by the manufacturer's CEO in March, fresh sale rumors circulated following Olympus' latest financial report – and the flames have been fanned by a recent Bloomberg story where he seemed to backtrack on that denial.

The sale talks began in early spring, following the board appointment of D Robert Hale – a partner in Californian firm ValueAct Capital, Olympus' largest shareholder with 5.4%, which was apparently pressing for the Imaging division to be sold following less than peak fiscal performance. A second member of ValueAct Capital has since been appointed to the board.

Following the Bloomberg story, and Olympus' open-ended comment made to us (see below), Photofocus was able to secure a full statement from the manufacturer that in no uncertain denies that the Imaging Division is for sale…

Read more: Olympus debunks rumors: "We currently have no plans to sell the business"

In a serious cybersecurity alert, a total of 33 Canon cameras have been found susceptible to critical vulnerabilities via both Wi-Fi and USB connections. The affected camera models are at risk of being infected by ransomware and malware, whereby cyber-attackers can hold photographs and videos taken on the camera to ransom.

Canon Japan has released a further ten countermeasure firmware updates for affected cameras via its Japanese website, and identified three newly released cameras since the security alert was issued that are also at risk: the Canon EOS 77D, M6 Mark II and M2. The new firmware and newly affected cameras have been updated below…

Terry O'Neill remembered in his own words

British portrait photographer Terry O'Neill, best known for his picture so the swinging sixties and his portraits of celebrity A-listers, died this past week aged 81. He passed away at his home, following a long fight against prostate cancer.

Born in London, his work is a catalogue of the rich and famous of the second half of the 20th century. His early work chronicling the early years of The Beatles, the Rolling Stones, David Bowie and others, led him to a career shooting portraits for top magazines around the world. His sitters have included The Queen, Frank Sinatra, and Faye Dunaway (who would later become his wife).

To mark his passing we are reproducing an interview we did with Terry O'Neill in 2016, originally published in Professional Photography magazine…