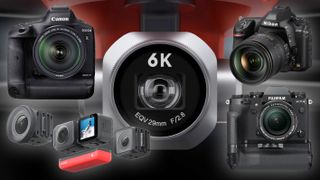 Okay, so 2020 might not be quite as futuristic as the movies led us to believe – though Sony did give us a car capable of (time of) flight! – but we've already had some pretty fantastic camera news this year.

Of course, we've just had CES 2020, which was the place that much of this new tech was revealed. And fascinatingly, for a show dominated by cutting-edge tech, it wasn't mirrorless cameras that dominated the event – it was Canon and Nikon's latest, hybrid, DSLRs!

That said, mirrorless is still the future – which is why there are rumors abound of new Fujifilm products. The relatively stale action camera market got a serious injection of life with a new modular camera, and even drones got a jolt of energy with an exciting new 48MP 8K model.

So, with 2020 off to an exciting start, here are the five biggest camera news stories of the week (and the year!)…

The Canon EOS-1D X Mark III features over 102 updated features, including a new 20.1MP image sensor, a Deep Learning AF system, and a redesigned mirror box for the fastest DSLR performance ever. Combined with 5.5K internal 12-bit RAW video, a game-changing new Smart Controller, support for HDR stills and video standards plus CFexpress support, it is in many ways the camera of the future.

While it may "only" pack a 20.1MP sensor – which is less than both the Sony A9 II and even the Canon EOS-1D X Mark II – Canon claims that the camera is capable of sharpness and resolution equal to a 24MP pro sensor. This is thanks to a completely new quad-layer, 16-point subsampling low pass filter that manages to block moiré without introduces the layer of softness found on other pro cameras…

Anyone who thinks DSLRs are the dinosaurs of the camera world needs to watch Jurassic Park to see what happens when dinosaurs come back. Last year the Canon EOS 90D proved a DSLR could do anything that a mirrorless camera could, and now it’s Nikon’s turn to meld the latest mirrorless technology with its classic full frame DSLR design.

What Nikon has done is to effectively take the sensor, AF technology and processing power of the Nikon mirrorless cameras, in this case the Z 6, and fit it to a DSLR body. You still have an optical viewfinder, and while you’re using it you get the same 51-point dedicated phase detection AF sensor used for so long (and to such good effect) in Nikon cameras. The live view experience, however, is transformed. With the on-sensor phase-detection AF of the Nikon Z 6, the D780 will offer much faster live view AF, with 273 AF points and eye detection…

It looks like Fujifilm is wasting no time ringing in the new year, with no fewer than three new cameras on the docket for announcement as soon as February. Which, in typical industry fashion (particularly when the spotlight is otherwise on Canon and Nikon's new products), have all been conveniently leaked.

It is claimed that the Fujifilm X-T4 will be arriving in March, slightly ahead of its usual September release, and that the camera will feature in-body image stabilization – which would, on the surface at least, fare ill for the H series.

In addition, we can expect an announcement for the Fujifilm X100V along with one other camera – the Fujifilm X-T200. An 04 February date has been touted as the big reveal for one or more of the products, which could significantly shake up Fujifilm's product line…

There was plenty of amazing camera tech on show at CES 2020, but Autel Robotics unveiled a family of drones that really made our jaws drop. The Autel EVO II is the first collapsible drone that can shoot 8K video, and take 48 megapixel stills – and a fitting announcement to coincide with the 10th birthday ready-to-fly drones.

Weighing 1127g, the Autel EVO II quadcopter has an impressive flight time of 40 minutes, 8GB of internal storage (as well as an SD card slot). It has 12 sensors to aid with navigation and obstacle avoidance - and it comes with a controller that has a built in display.

While the shooting specs of the Autel Evo II may look impressive, and a serious rival to DJI as the best camera drone, serious filmmakers and photographers may be be even more tempted by its two sister models – one of which boasts a sensor that's four times larger, and another that features a thermal imaging camera…

Why shouldn’t action cameras be modular? A brand known for 360 cameras, Insta360 has today announced full details of the Insta360 One R – an action cam described as ‘adaptive’ that comes with up to three interchangeable lens/sensor units… and one of them even has a 1-inch sensor developed with Leica.

Launched at CES 2020, the standard package is called the Insta360 One R Twin Edition, which comprises two interchangeable lens units for both 360º and 4K wide angle wideangle shooting.

In a concept new to the action camera market, the core square module of the Insta 360 One R acts as a processor that snugly affixes a separate square lens module, be it the dual-lens 360º, 4K or 1-inch lens modules. Once snapped together, they sit upon a battery base, which also adds extra strength. However, the processor module – which hosts a touchscreen – can be easily reversed for selfie angles…

The best dash cam in 2020: constant protection for you and your car
The best 360 cameras: shoot panoramas, 360 video and even 3D
The best mirrorless camera in 2020: these are the best compact system cameras