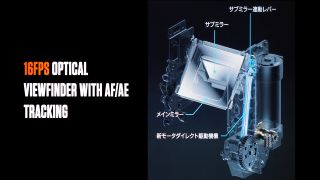 It turns out that you really can teach an old dog new tricks. Canon has just released the fastest DSLR ever, with a mechanical shutter capable of 16 frames per second with full tracking, autofocus and autoexposure.

And how did it achieve that? By completely redesigning how the mirror box works. You can read our Canon EOS-1D X Mark III review to see what the end results are, but here Canon tells us how it managed to do new things with a mirror mechanism in 2020.

“Many years ago I spoke to someone I knew who was a senior engineer working for a camera company that makes cameras, and SLRs especially – who obviously isn’t Canon,” said Mike Burnhill, technical support manager, for Canon Europe.

“And they said basically, under their mathematics, the fastest you could ever achieve stable autofocus was 12 frames a second – that was it, that was the maximum that could ever be done, because physics meant that it was not possible.” For reference, the Nikon D5’s fastest mechanical shutter speed with AF is 12 frames.

“Here we are, maybe a decade later, we’re now getting 16 frames per second. How? We’ve basically redesigned how the mirror boxes work. We’re no longer following the same principles – we’re changing the rules, shall we say. No longer do we use gravity and springs of the old days, it’s all driven using solenoids  – the mirror is pushed up and pulled down, very very precisely.”

Obviously if you simply hold out an apple and drop it, it’s going to take longer to hit the ground than it would if you threw it. The principle is the same here, with solenoids effectively hurtling the shutter (apple) much faster – and much more precisely – than it would achieve by gravity alone.

“The time that the mirror rattles is greatly reduced, because it’s being pushed into place and pulled into place, so it’s sitting exactly. And for this product as well, we’ve now got both mirrors synchronized, so they move together and stop together. So any vibration is taken out of both mirrors at the same time. That’s really reducing the amount of wobble.”

More than just reducing rattle, this also reduces viewfinder blackout. “The benefit of that is not only more accurate AF, but reduced blackout time. So even though you’re now shooting at 16 frames a second, the mirror is returning much quicker – and you’re seeing the picture much, much quicker than before.”

In this way, the Canon EOS-1D X Mark III is able to reduce blackout to a minimum in order to compete with the blackout-free electronic viewfinder of its mirrorless rival, the Sony A9 II.

Who said the DSLR was dead? Certainly not Canon. When the company is still finding ways to refine and redesign the trusty mirror mechanism, it appears there’s plenty of life in this old dog yet.