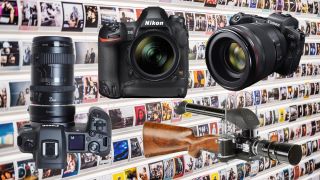 After a week where camera news was dominated by the build-up to Black Friday, the photography industry started calming back down this week – and we got back to our steady diet of rumors, reports and tasty news bites.

We got more sneaky spec leaks of two major 2020 releases from Canon and Nikon, an exciting rumor of a new boutique special effect lens, the grand opening of the coolest camera shop we've ever seen, and record-setting sale prices for some of the world's rarest cameras.

One of the rarest Leica cameras in the world has sold for a record sum, breaking the "magic price barrier" of one million euros for only the second time at the 35th Leitz Photographica Auction in Vienna – at which more ultra-rare Leicas were sold.

The Leica MP black paint No. 2 was sold for an astonishing €1.02 million (US$1.13 million / £861,233 / AU$1.66 million). It was described by Leitz as "one of the most important Leica cameras made. And probably the one that started the trend of black paint M cameras being used by professionals and loved by collectors nowadays."

Only 412 Leica MPs were produced in total, making this one of the rarest Leica models of all time; of those, only 141 were made in black, making it even rarer. The camera sold in the auction was the rarest specimen imaginable, being the second Leica MP ever made and the first one ever made in black…

We might only be a hop, skip and a jump away from the end of 2019, but the rumor mill is already rumbling along for 2020 – and it looks like we're not going to be disappointed by next year's camera offerings!

One of the most exciting rumors we've heard is that Canon will reportedly be releasing a new EOS R-series camera, which has been dubbed the 'Canon EOS Rs' in homage to the hi-res Canon 5DS – so you can see where this is going.

The Canon EOS Rs is rumored to have a beefy 75MP full frame CMOS sensor, which is a huge step up from the 30.3MP sensor on the Canon EOS R. Plus, this sensor will also apparently "focus on the dynamic range"…

The development of the Nikon D6 was announced back in September, but details have been scarce since that point, with little officially released from Nikon. However, an updated list of potential Nikon D6 specifications have been reported.

It is claimed that the Nikon D6 will be released in mid-February – potentially 12 February. The in-body image stabilization system (IBIS) from the Nikon Z7 and Z6 will be transplanted for inclusion in the D6, which will also "have more features and customization options for various aspects of the camera and settings".

Companion applications will apparently also see improvements, but these will most likely launch after the camera releases. Canon has described its 1D X Mark III as a 'hybrid' camera, with some mirrorless functions – and the Nikon D6 will push this boat out even further, most obviously with the IBIS, along with better video and that all important silent shooting…

Fujifilm's House of Photography is a must-visit!

Fujifilm’s House of Photography opened in London this week, with the first 100 people through the door each winning a camera! The 7,520ft² concept store is located on Long Acre in Covent Garden, and has been conceived as a sensory photography playground.

It will put cameras in the hands of visitors – to inspire and nurture the love of taking, sharing and printing out photographs – and aims to become the most photographed store in London. Over 400 customers queued from 6am on opening day, waiting for the doors to open at 11am.

The Fujifilm House of Photography is arranged over three storeys. The basement level comprises a lounge space for Fujifilm enthusiasts and professional photographers, and is designed for socializing, collaborating and sharing ideas…

Read more: Fujifilm's House of Photography concept store is open now – and it's a must-visit!

Canon designs a soft focus lens for the EOS R

Canon has developed a brand new soft focus optic for the Canon EOS R system. The manufacturer has patented a Canon RF 35mm f/1.4 Softfocus lens – which may be a companion for the previously patented RF 35mm f/1.2L, tipped to be announced next year.

This would be the company's first soft focus lens since 1987's Canon EF 135mm f/2.8L Softfocus, and an intriguing counterpart to its upcoming Canon EF 85mm f/1.2L USM DS – a defocus smoothing lens for the RF mount.

The US patent application was spotted by the sleuths at Canon News, who describe it as "a complex lens". It possesses the following specifications and characteristics…