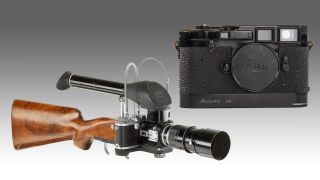 One of the rarest Leica cameras in the world has sold for a record sum, breaking the "magic price barrier" of one million euros for only the second time at the 35th Leitz Photographica Auction in Vienna.

The Leica MP black paint No. 2 was sold for an astonishing €1.02 million (US$1.13 million / £861,233 / AU$1.66 million). It was described by Leitz as "one of the most important Leica cameras made. And probably the one that started the trend of black paint M cameras being used by professionals and loved by collectors nowadays."

Only 412 Leica MPs were produced in total, making this one of the rarest Leica models of all time; of those, only 141 were made in black, making it even rarer. The camera sold in the auction was the rarest specimen imaginable, being the second Leica MP ever made and the first one ever made in black.

The Leica Gun Rifle was only produced for a single year, from 1938 to 1939, and in amazingly limited quantities; it is estimated that there were between 6 and 14 made, making it incredibly exclusive.

Developed between 1935 and 1937 by E Leitz in New York, the exotic Leica Gun Rifle was apparently inspired by the noted African wildlife photographer Commander Attilio Gatti.

While the wildly extravagant spending among private collectors might be off-putting to some, it is heartening to note that the entire sale proceeds from one auction lot were donated to charity.

The 10 best Leica cameras in 2019: from classic M-mounts to modern mirrorless
THIS is why Leica is so expensive
Hands on: Leica SL2 review