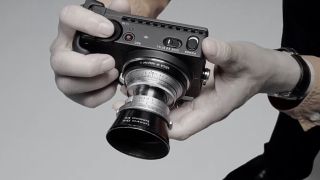 Appearances can be deceptive. Straight out of the box, the Sigma fp looks cute and compact, but also rather basic. It’s all very well for Sigma to say that it’s been designed to be small, light and modular, but compared to its established full-frame rivals, it does look, well, a bit minimal. There’s not even an electronic viewfinder, for heaven’s sake.

But the amazing new Sigma fp isn’t like ordinary stills or hybrid stills/video cameras. It’s got more in common with module professional photography and videography systems, where you add the accessories and components you need on a job-by-job basis.

You can get the idea from this official Sigma promotional video (below), which shows the Sigma fp in all sorts of different configurations for studio photography, cinematography and simple handheld use.

It is directly compatible with L-Mount lenses (including three new Sigma L-Mount lenses released on the same day as the Sigma fp) and Sigma SA and even Canon EF lenses via Sigma's MC-21 adaptors (below). It can also work with Sigma flashguns and regular lighting equipment via add-on adaptors and mounts. If Sigma wants the fp to rank amongst the best mirrorless cameras, and even the best 4K cameras for filmmaking, then this expandability will be vital.

So just to give you an idea of the expansion options available, here are nine accessories announced alongside the Sigma fp to help you adapt and expand the system according to your needs.

The Sigma fp doesn’t have a hotshoe integrated into the body, but you get this hotshoe adaptor with the camera, which simply screws on to the body when you need it – and unscrews for a neater, simpler camera profile when you don’t.

The Sigma fp doesn’t have a viewfinder built in, and Sigma is not offering a clip-on accessory electronic viewfinder of the normal sort. Instead, it has this – a much larger viewfinder accessory that fits over the rear screen, cuts out extraneous light and offers 2.5x magnification.

This is supplied with the LVF-11 View Finder (above) but will also be sold separately. It attaches to the Sigma fp and then offers a mounting point for all sorts of accessories (not just the LVF-11) via a standard ⅜-inch thread.

The Sigma fp is designed to be small and compact, but sometimes you might want it to be just that little bit easier to grip, especially if you’re using larger, heavier lenses. The HG-11 Hand Grip gives you an improved hold when you need it, and can be detached when you don’t.

The HG-11 Hand grip gives a raised profiled surface for a better grip, but that might not be enough for big cine lenses or telephotos, and that’s where the HG-21 comes in. It’s a much larger detachable handgrip that screws to the base the camera and adds a full-height grip at the side.

This cable release is designed for the Sigma fp but looks pretty much like any other – except this one has a 3.5mm microphone socket built in to offer an alternative mic input to the stereo mics built into the camera body.

This Sigma flash isn’t new or designed specifically for the Sigma fp – but it will work directly with Sigma’s new camera. All you need (we presume) is the Sigma Hot Shoe Unit HU-11 that’s included in the box with the camera.

This is another Sigma product that’s on sale already, but takes on extra significance with the launch of the Sigma fp. It makes it possible to use existing Sigma SA mount lenses on the fp, or Canon EF lenses.

Video shooters tend not to hold and support cameras in the same way as stills photographers. Many videographers prefer a vertical handgrip attached to the base of the camera. It’s much more stable and secure for one-handed filming, even at arm’s length.

No doubt there will be many more accessories to come for the Sigma fp, but already it’s very clear that although this looks like quite a stripped-back, basic kind of camera, its modular design actually allows a wide range of configurations, setups and uses. We can’t wait to try it out!

• These are the best mirrorless cameras you can get right now
• The L-mount lens roadmap: 42 lenses by the end of 2020!
• The best video editing software for vloggers and filmmakers