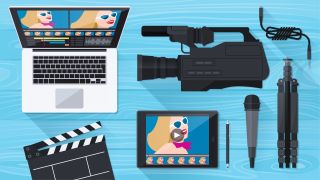 If you’ve mastered some of the free video editing software out there and are ready to invest in something more premium, we’ve selected eight of the best  video editing softzware tools to take your home movies or motion pictures to the next level – whether you are using a desktop computer or tablet.

There are lots  of options available, with software for computers and apps for smartphones, built for beginners and engineered for experts. Ultimately, depending on the type of video you want to create, there’s likely a perfect solution available.

For example, if you’re looking for a simple UI with easy trimming tools and export options, you can go for Joyoshare’s Media Cutter for Windows and Mac OS. Alternatively, for a suite of premium tools for feature films and polished YouTube videos, Davinci Resolve Studio could be the one for you, while, for graphic designers or photographers who are already subscribed to Adobe Creative Cloud, Premiere Pro is the obvious choice.

There’s also never been a better time to better understand video editing from a video capture point of view. DSLR and mirrorless cameras once only snapped photos, but can now capture pro-grade footage. With a range of premium lenses to choose from, not to mention advances in low-light shooting, demonstrated by excellent cameras like the Sony A7 III, simple montages can look beautiful with the right edit.

Even footage captured on camera phones can be harnessed to create something jaw-dropping. The 2018 Horror film, Unsane, directed by Steven Soderbergh, was recorded entirely on an iPhone.

Premiere Pro is an industry standard for good reason. For starters, it integrates beautifully with Adobe’s Creative Cloud, which includes software like Lightroom and Photoshop. If you already have a full subscription to the Adobe’s CC service, there’s a good chance you already have access to Premiere Pro.

If you do, then a professional-grade video editing tool is at your command. While its interface is traditional when you first fire it up, the modular UI is highly customisable, and there are predefined workspaces too. In recent years, inclusions of Lumetri Color and more intuitive interaction have made quick grading of footage and slicing up a streamlined process.

It’s brimming with handy tools too. There are pre-installed effects and transitions that can be supplemented by a host of third-party options, and you can save a lot of time when handling reference audio by automatically having Premiere Pro align two audio tracks automatically.

The best one-time purchase video editor for pros and enthusiasts

DaVinci Resolve Studio started out as a color-grading tool, and has since become an industry-standard editor. With a familiar UI consisting of a timeline, monitor window, and media pool, anyone coming from Premiere Pro should feel right at home.

Resolve Studio 16 Beta, however, goes a step further, introducing a new ‘cut page’ in the Dual Timeline. Displaying thumbs of your video project on the timeline and removing much of the visual complexity, it’s ideally suited to quick edits.

With a new Neural Engine, Resolve 16 uses machine learning to apply advanced effects, including removing an object from a scene, and morph transitions with a focus on faces. The pro version also supports HDR color grading, collaborative working and more, and with a one-time purchase price it’s a great option for individuals who don’t want to pay a monthly subscription.

Fusion visual effects and Fairlight audio are also included as part of the Resolve package. These are the equivalent of After Effects and Audition from Adobe. The combination means your projects can incorporate footage, perfectly tuned audio and custom-made animated effects – and all without costing you a penny when it comes to software.

Platform: MacOS | Ease of use: Intermediate | 4K support: No

$6.82
View Deal at Textbooks.com
$299.99
View Deal at Apple
See all prices (2 found)
44 Amazon customer reviews
☆☆☆☆☆
Easier to get to grips with for new editors
Extremely powerful once mastered
Plugins needed for full functionality
Timeline might not be to seasoned editor’s tastes

Final Cut Pro X packs plenty of pro-grade features, from multi-camera edits to HDR support, in-app colour grading and even 360-degree video. A sweetener is the fact that it’s also perfectly optimised for Macs, so provided you’re running it on a capable machine it should be both more stable and quicker to render a comparable project than Premiere Pro.

Its image-heavy UI may have thrown a lot of seasoned users when it was introduced, but for anyone new to editing it actually makes the whole process simpler to get your head around – so if you’re already invested in Apple’s ecosystem and have outgrown iMovie, there’s a good chance that Final Cut Pro X will be ideal.

The best for prosumers on a budget

With expanded colour grading options and a range of automatic filters, the new version of VideoStudio Ultimate is seriously competitive. It gives you control of highlights, mid-tones and lowlights, just like Lightroom does for photos, and the pricier Premiere Pro for videos. It even offers control over specific colours, so you can make a shade of green pop without affecting the rest of the scene.

The software also supports the creation of text masks, so you can easily overlay dynamic titles on your videos without having to jump into another application. Even transitions are handled in a novel, customisable way, so you can align elements across scenes so the fades, blurs or wipes happen exactly how you want them to.

With a core interface that’s very similar to much of the more premium competition, it’s a great gateway editor for beginners to get started with. The software also offers a handy screen recording feature – a notable omission from Windows devices, and one that makes creating tutorial videos a doddle. Loaded up with other hidden gems, VideoStudio Ultimate makes for a great, well-priced piece of software.

Easy to use
Affordable
Basic features
May frustrate pros

Joyoshare Media Cutter is an incredibly easy to use tool that can trim both video and audio files, and has a few other tricks up its sleeve too. For anyone looking to do the basics, like converting audio or video from one file format to another, overlaying watermarks, or even more advanced things like adding subtitles, it could be the perfect solution.

If you’ve got a lot of clips you want to join, it can also handle sequencing and the basics of pulling an edit together too, and its $29.95 price is also easy to digest. While Joyoshare’s software is more comprehensive than, say, Windows Movie Maker, it isn’t a pro solution, so will frustrate anyone who wants more advanced options, but if you’re a novice in need of a quick fix, download the free trial to see if it fits the bill.

The most advanced video editing app available for Android

With iMovie being an included app for iOS devices, the lack of a robust editing tool in the Android ecosystem was acutely felt until PowerDirector hit the scene.

It features a traditional timeline, and all the tools you’d expect for trimming, editing and exporting your movies, but it also goes much further. Support for layers means you can have multiple audio tracks, a voiceover and backing track for example. A host of effects and transitions are included, and even advanced features like chroma key, for green screen editing, are available, while if you opt for the paid version you get access to 4K output too.

The application can feel a touch clunky, especially on smaller-screened devices, so try the free version first to make sure it runs well on your device. In addition, the pricing may feel steep for an Android app – but what you get is an incredibly comprehensive solution that could even replace your desktop editor if your needs are mobile-first.

Magisto will put a lot of video professionals and purists off. It relies heavily on templates, and employs a cookie cutter backend system for creating videos. You simply select the photos and videos you want, pick a theme, upload your music or choose from a range of backing tracks, and hey presto: your video is done after a few minutes' rendering. There is a desktop version of the software, but we're focusing on the mobile experience, as it’s where Magisto shines

Within the application, you can decide whether you want your video rendered 1:1 for Instagram, or 16:9 portrait, or landscape, though the max output resolution is 720p.

There’s also an option to overlay a logo, dictate how heavy the theme effects are, and even the pace of the final movie. Using what Magisto refers to as its AI engine, it determines the order of the clips, and applies effects as it sees fit.

While there’s some scope for reordering, it’s largely automated and this is a double-edged sword. It has some neat capabilities - face detection for example, so it knows to keep faces in frame. On the other hand, there’s no granular control over individual elements, so if one scene is slightly off, you either remove it, or press the re-edit button, and hope for the best.

There is a free version, but to unlock 720p video, it will cost you $19.99 for a month month, or $119.88/year, making it pricey and potentially better suited to businesses rather than individuals.

Filmora Go is a powerful video editing tool for Android that's perfect when you're out and about and in a pinch. It sits between PowerDirector for Mobile and Magisto in terms of its advanced capabilities, and is also cheaper than both, so it's a great starting point for Android video editors.

With a simplified touch interface it allows you to import your video clips, trim them, add transitions between them, overlay titles and apply themes.

Rather than use pro video-editing language, to export your film you simply hit the Save button, making it incredibly user-friendly. Once done, you can export your project to Facebook, Vimeo, or YouTube directly, or save it to your device.

Despite being able to ingest 4K content from phones like the Honor 20 Pro, output options are limited to 720p.

The free version overlays a watermark on your edit but has full functionality, so if you want to try it out before spending the one-off £1.99 / $1.99 cost to remove it, you’ve got nothing to lose.

The best laptop for video editing

Best monitors for photographers in 2019

The best photo-editing software you can buy