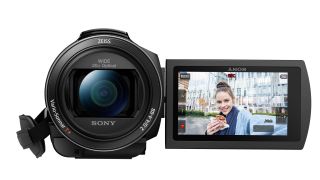 Launched at the same time as the new Sony ZV-1, the Sony FDR-AX43 is the latest addition to Sony's camcorder range. This 20x zoom model, aimed at vloggers and family shooters alike, has been on sale in North America and Australia for some time – but has now arrived in Europe and the UK.

Slotting neatly between the AX33 and AX53 in the range, the Sony AX43 offers 4K video recording in a 510g body. The 1/2.5 type back-illuminated Exmor R CMOS Sensor offers an effective resolution of 8.29 megapixels, and recording XAVC S 4K video at a bit rage of 100 Mbps. Slow-motion can be captured in 1080p resoution at 100fps.

The rotating three-inch touchscreen make this camcorder well suited to vloggers - and an optional pistol grip helps to improve the handling for those who are using the camera for run-and-gun footage. Sony's Balanced Optical SteadyShot offers gimbal-like image stabilization, promising wobble-free footage even when using the longer ends of the zoom range. Minijack outputs are provided for both accessory earphones and microphones. The rechargeable battery promises a running time of up to 235 mins.