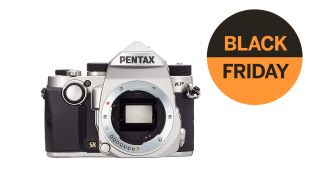 The Black Friday camera deals are now coming thick and fast, but we've got a particularly good one for you today. Amazon UK has slashed the price on their Pentax products, with up to 40% off! The Pentax KP is one of the products to receive a discount. Plus, the Pentax K-70 is also available with an 18-270mm lens with a 21% discount!

This are just two of many fantastic Amazon Black Friday deals on photography kit, but you'll have to act quickly as both of the deals expire at the stroke of midnight tonight!

Pentax KP: Now £755, was £999
You can now pick up the Pentax KP for just £755, which is an amazing discount of £245 from its original price of £999! This 23.3MP APS-C camera has the Pixel Shift Resolution System and an electronic shutter. Ends midnight 25 NovemberView Deal

This amazing Pentax KP deal runs out at midnight, so don't delay!

However, before you go, there are also some other amazing Pentax deals as well! From 58% off a pair of Pentax binoculars to a Pentax 50mm f/1.8 lens that's available for under £100, we've collected a few more special deals below for you to check out as well.