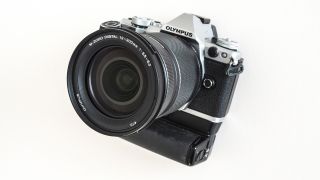 It looks like the Olympus OM-D E-M5 Mark III will finally be announced in August, four and a half years after its predecessor, according to a new camera registration and an upcoming Olympus press event.

The mid-range Micro Four Thirds camera will, like its forebears, be a highly compact but extremely capable body aimed at enthusiasts and advanced users, likely with a focus on video shooting.

Our first tip-off about the new camera came courtesy of 43Rumors, which shared a report that the manufacturer had invited press to a big event in the United States.

"Seems like Olympus is having a 3 day event in Austin, Texas on August 10th," posted the site. "My guess is a camera announcement."

This was quickly followed by the registration of a new Olympus camera, under the product name IM016, with an Asian certification body, as spotted by Japanese camera sleuth Nokishita.

Not only do all the signs point towards an E-M5 Mark III announcement, it also ties in with Olympus' own comments earlier this year.

"As you know, E-M5 line was the first OM-D series, and it is important to the lineup for mid-range users that would express the strength of Olympus' system… We can reassure you that we plan to introduce a successor model," said Shigemi Sugimoto, Head of Olympus' Imaging Business Unit, in March.

"It's very good timing to say something from our side," added Toshiyuki Terada, General Manager of the Global Marketing Department for Imaging.

The original E-M5, launched in February 2012, was one of the cameras that kicked off the whole mirrorless revolution. It was the first of Olympus' OM-D line, and the first mirrorless body that could be used for advanced and professional photography.

It was the pillar that Olympus built its mirrorless market dominance upon, so expectations have been high for a new model ever since the Mark II was released in February 2015. However, with the massive relocation of its manufacturing facilities from China to Vietnam, Olympus wasn't able to bring it to market last year.

With the company facing increased competition not only from its traditional mirrorless rivals, but also from Canon and Nikon's full-frame efforts, Olympus needs a big new product to reaffirm its position in the market. As such, the Olympus OM-D E-M5 Mark III could be the most important camera it has ever released.

Olympus OM-D E-M5 Mark III: what we expect
The best Olympus cameras in 2019
The best Micro Four Thirds lenses for your Olympus or Panasonic camera