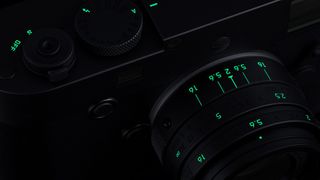 Leica has announced a new special edition of its M Monochrom camera.

Designed by Marcus Wainwright, founder and CEO of fashion company Rag & Bone, the new version has a sleek matte black finish, with engraved numbers that glow in the dark.

Many of the Leica signatures – the silver trim, the red dot – have been blacked out, while the grip of the original Monochrom has been replaced with a black leather version. The finish is also scratch-resistant, maintaining its high-class look.

In a blog post for Leica, Wainwright described his approach to designing the M Monochrom Stealth Edition:

“In the spirit of the Noctilux and fitting the inconspicuous nature of the camera, I chose the luminous features. I’m drawn to watches as well and there’s something about the purity of function that I love. I just thought that seeing as this is a camera that’s used in low light a lot, maybe there’s an opportunity to make this one aspect of the camera more functional. I think it really works.”

This special edition comes with a Leica Summicron-M 35 mm f/2 ASPH lens, a fast prime lens with a compact build. It has a rectangular, full-metal lens hood with a screw mount, and there’s also a screw-in protector ring to protect the filter thread when it’s not in use. Also included in the box is a black fabric strap.

The original Monochrom was the world’s first digital black-and-white, full-frame camera. Released in 2012, it was subsequently updated with the Typ 246 in 2015.

As the name implies, it’s a black-and-white camera only, lacking a colour filter over its sensor. The advantage of this is that it's able to gather more detail and produce sharper black-and-white images than a colour camera. It’s also less susceptible to image noise and has a low-vibration shutter-release control to reduce camera shake.

Leica is making just 125 of these cameras, and they’re going on sale on 20 March priced at £13,000 in the UK – around twice as much as the original camera. Head to Leica’s website for more details.