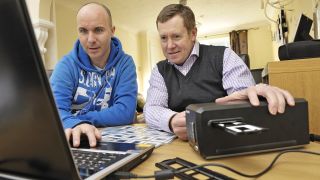 The best film scanners let you digitise your favorite analog photos without sacrificing quality and without taking hours and hours of work. There are lots of film scanners on the market, but they designed for a wide range of users and expectations, so this guide will help you find the perfect scanner for your needs.

You may not have noticed, but film is making a comeback! You can still buy film in sizes from 35mm to medium format roll film and even large format sheet film. Check out our guide to the best film to buy.

There are lots of film cameras around too, and we've got a guide to the best film cameras to invest in. There's a huge used camera market and a surprising amount of know-how and expertise around classic film cameras.

Most photographers, however, have switched to digital, so they simply need a scanner to bring their old analog photos into their digital ecosystem. If you've got boxes of prints, a regular flatbed scanner is ideal. For the very best results, however, you should scan the original negative rather than a photo print. This can be done with a conventional flatbed scanner that has the option to scan negs and slides, and includes the required holders.

You will get better results from negatives and transparencies if you use a dedicated film scanner. Cheaper film scanners can scan incredibly quickly but at the expense of image quality, while high-end models take their time but reward you with stunning clarity, resolving every single film grain in your original photo.

We've attempted to make the process of selecting a scanner easier by putting together a list that suits all needs and all budgets. All will scan 35mm colour and black and white negatives, and the flatbed scanners can also scan medium format film, while others are capable of digitizing 8mm film.

The best film scanners in 2020

So what's the best film scanner? Right now, we think it's the OpticFilm 8100 from film scanning expert Plustek: it extracts phenomenal levels of detail from your film, is backed up by excellent included scanning software, and it's sensibly priced. We love it. If you're after something that'll scan multiple film frames automatically, though, and has the versatility to scan photo prints and documents, Epson's V550 Photo flatbed scanner is a great choice.

This is baby of the OpticFilm range, yet it still boasts a respectable 7,200dpi maximum scanning resolution. It’s also a real optical film scanner and not just a digital camera sensor in a scanner body. This does however mean the 8100 is no speed demon. Each 35mm film frame takes nearly 4 minutes to scan at max res, but 3,600dpi is more than adequate for most film stocks and you’ll have a scanned frame in 1 minute 20 seconds. Though the front panel has a QuickScan button that automatically scans and saves a frame to you computer desktop, it’s best to load up the bundled SilverFast software that provides comprehensive scanning options and pre-scan image enhancement. Even without messing with the settings, and scanning at 3,600dpi, the 8100 is in a league of its own for scan quality, extracting bags of detail from our 35mm negs and transparencies. It also lets you scan the entire film frame with no overzealous cropping. The 8100 did struggle to reveal every detail in the shadow areas of our high-contrast 35mm slide positive, but this is our only nitpick.

Flatbed scanners are traditionally thought of as a more versatile but less finessed alternative to a dedicated film scanner. However our experience with the V550 was very positive. Naturally it can scan photos and documents, but it includes holders for 35mm film, 35mm slides, and 120/220 medium format film. Scanning resolution can go as high as a whopping 12,800dpi, but we found 3,200dpi more than enough for our test film stocks, producing a digitized image equivalent to around 12.2MP. You might imagine that laying out up to a dozen 35mm film frames over the flatbed would result in fast scanning, but the V550 Photo still scans each frame individually – albeit automatically – and takes around one minute per frame at 3,200dpi. Scanning with Digital ICE automatic dust and scratch removal enabled only adds around 20 seconds per frame. Results are superior to the Plustek OpticFilm 135 dedicated film scanner, with noticeably more detail, plus better default colour and contrast. However the V550 can’t match the Opticfilm 8100’s ability to extract every speck of detail. It also crops slightly more of each frame, though nothing too severe.

An impressive piece of kit, but the cheaper V550 Photo makes more sense

Positioned at the pinnacle of Epson’s scanner range, the V850 Pro is aimed squarely at film fanatics wanting the best possible conversion to digital images. Its eye-opening price tag is a result of a dedicated scanning lens designed especially for film, and it being bundled with not one but two sets of film holders. The the 35mm film strip and 35mm slide holders are an appreciable step up in quality from those included with the V550 Photo. The scanner itself is also an absolute beast and feels like a premium product. Like the V550, resolution tops out at 12,800dpi, but again, it’s rare you’ll need such extreme resolving power. At 3,200dpi we didn’t find the V850 to be significantly faster than the V550, but step up to higher resolutions and this top-tier model pulls ahead, taking just 2 minutes 30 seconds to scan a 35mm frame at 12,800 dpi. However there’s precious little to separate the V850 from the V550 when it comes to scan quality. Both deliver excellent results that are almost indistinguishable, making the V850’s hefty price premium tough to justify.

Plustek's top-tier film scanner is good, but the cheaper 8100 is better still

The problem with most dedicated film scanners is you have to stick around to manually load each frame of film to be scanned. The beauty of the OpticFilm 135 is its motorised film transport automatically advances a strip of six 35mm film frames or four 35mm slides through the scanner. The process is complete in just 3 minutes 20 seconds when scanning negs at 3,600dpi, though unlike the cheaper OpticFilm 8100, this is the highest resolution available. Where the 8100 uses third-party scanning software, the newer OpticFilm 135 is bundled with Plustek’s own QuickScan Plus program that sports a more modern, easier to configure interface. However it offers fewer pre-scan customisation options than the old SilverFast software and is somewhat lacking if you want total scanning control. Scan quality is also disappointing compared to the older OpticFilm 8100. Fine detail is nowhere near as well resolved at the same 3,600dpi resolution, and scans exhibit less detail than those from Epson’s cheaper V550 flatbed scanner. We were also unimpressed with the muted default contrast and slightly inaccurate colour of most of our test scans.

Cheap yet reasonably cheerful, but not good with slides

Not only does this Kenro scanner let you scan 35mm negative or positive film and 35mm slides, it can also digitize 3.5x5-inch, 6x4-inch  and 7x5-inch prints. It does so by saving straight to an SD card, so no messing about with separate software, and the 2.4-inch LCD monitor gives an instant preview of the frame about to be scanner. That’s because this is a camera-based scanner that uses a 5.1MP CMOS sensor to photograph each film frame. The menu interface isn’t quite as slick as the Kodak Scanza’s, but the process is almost as fast. We used the 10MP interpolated resolution setting, equivalent to 3,600dpi. Although upscaled, the Kenro’s scans still reveal more fine detail than the Scanza does at 22MP, and while images are still fairly soft, they don’t exhibit the Scanza’s unsightly watercolour look. Where the Kenro falls short is with 35mm slide transparencies, as its dynamic range is simply appalling. Scans of high-contrast slides have hugely blown highlights and no shadow detail to compensate. You’ll also have to put up with heavy-handed cropping of any 35mm film frame.

A pleasure to use, but the final scan results are much less pleasing

The Scanza is all about convenience. It’s easily the smallest scanner here, yet you get a 3.5-inch tilting colour monitor for image previews, and scans are saved straight to an SD card – no computer or additional software required. Several film holders are included, allowing you to scan 35mm, 126, 110, Super 8 and 8mm film negatives and slides. However, unlike most scanners, the 35mm film holder only has a single frame cutout, so you have to feed the film itself through the holder, increasing the chances of marking it with dust and fingerprints. This isn’t technically a scanner, but rather a camera. It photographs each film frame with a selectable 14MP or interpolated 22MP resolution, and does so with a single press of a button. The process really couldn’t be easier or faster. But this speed comes at the cost of scanning quality. Despite having 22MP on tap, scans appear painterly, overprocessed, and obviously lacking in fine detail, even without viewing at 100% image size. At least the dynamic range is pretty good, and the Scanza doesn’t crop each frame too heavily.

An efficient way to scan lots of 35mm negatives

If you have a lot of 35mm film to batch scan, the Pacific Image PowerFilm Scanner is the way to get the job done. It's a beast of a scanner that does basically one job but does it exceptionally well and efficiently. Simply load your unmounted strips and it'll scan up to ten of them with a single command. You also have a choice between high-resolution 24MP scans or quicker 6MP scans if you don't need every image in pristine quality. These quicker scans can take as little as 24 seconds each, so this is an ideal way to digitise an archive as efficiently as possible. All this talk of efficiency does belie the fact that the Pacific Image PowerFilm Scanner is also very good at what it does, producing images of excellent detail and quality. Pacific Image's proprietary infrared cleaning technology, MagicTouch, also works to remove dust and blemishes for a clean final image that's ready for printing. A fantastic tool for working through an archive.

Below you'll find the results from our scanning tests, all of which used the same 35mm transparency. What you'll see is a small crop of a much larger image.

5 things to look for in a film scanner

Don’t be swayed by sky-high scanning resolutions. Unless you’re digitising extremely slow film speed, 3,200dpi will be more than enough. Film does not have the same resolving power as today's sensors.

If you want the best possible results, good scanning software is a must. It’ll let you fine tune every element of the scanning process.

Standalone film scanners that save directly to a memory card are great for convenience, but don’t expect the image quality to be anything special.

Cheaper scanners can often be let down be tacky film holders that are tricky to use and can compromise the quality of the final image.