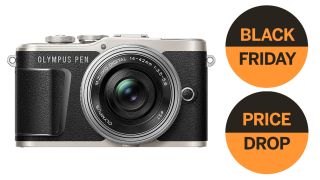 Black Friday has arrived - and Amazon has made it official with this incredible Olympus PEN E-PL9 + 14-42mm lens deal! Available in three stylish colors, including Brown/ Silver, Black and White/ Silver, the Olympus PEN E-PL9 is a great choice for anyone who wants to step beyond smartphone photography and get used to a 'real' camera.

Remember that these deals are only available until midnight on Friday 22 November, so don't delay! The Olympus PEN E-PL9 has a 16MP CMOS sensor and a powerful TruePic VIII image processor. It's also got a high-resolution, flip-down 3-inch touchscreen LCD that's perfect for vlogging and taking selfies.

These deals also come with a 14-42mm EZ pancake lens, a BLS-50 lithium-ion battery, a BCS-5 battery charger and a Micro-Four Thirds body cap. The 14-42mm pancakes lens helps make this piece of kit light, compact and easy to transport around.

The best deals are on the Olympus PEN E-PL9 in Brown/ Silver and White/ Silver:

Olympus PEN E-PL9 in Brown/ Silver + 14-42mm: £99 off
The Olympus PEN E-PL9 is now available for only £349.99 in this amazing Amazon Black Friday deal! With a 16MP sensor, 4K movies and WiFi, this little camera is the perfect companion for any photographer. (UK only)
View Deal

However, if you don't mind paying a little more, the Olympus PEN E-PL9 in Black is also a great price!

These amazing Olympus PEN E-PL9 deals show that Black Friday season has officially begun. You can check out more fantastic discounts at the pages below…