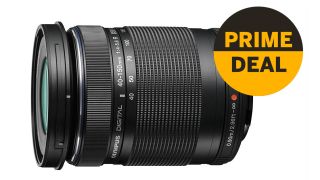 We have just spotted this amazing UK deal on this Olympus lens – and is one of the best Prime Day camera deals that we have seen so far in this 48 hour online Amazon sale. It is the lowest price that we have EVER seen on this useful MFT-fit lens. Amazon reckons this is a phenomenal £193 discount on the recommended retail price of this lens.

With an effective focal length range of 80-300mm, this is a perfect partner with a standard kit lens - and is great for zoom in on distant detail, making it a great lens for shooting sport, wildlife, and for candid portraits.

Canon EF 50mm f/1.4 USM prime: was £339, now just £254
This is one of the most popular prime lenses for the Canon EOS DSLRs – and particularly loved by portrait photographers. The wide f/1.4 maximum aperture allows you to create artistically blurred backgrounds, and this lens is as comfortable when used in manual focus mode as in autofocus. With an £85 saving, it is a Prime Day bargain.
UK deal – ends midnight 16 JulyView Deal

Sony FE 50mm f/1.8 standard prime: was £169, now just £135
This is a great fast-apertured lens for use with any of Sony's E-mount mirrorless cameras, including popular models such as the full frame A7 series, to the APS-C A6000 series. The f/1.8 maximum aperture make this great for lowlight shooting - but comes into its own for portraiture, allowing you to create blurred 'bokeh' backgrounds without spending a fortune (and you save £34 during Prime Day).
UK deal – ends midnight 16 JulyView Deal

Canon EF-S 10-18mm superwide zoom: was £239, now just £179
A great second zoom for those using Canon DSLRs from the EOS 4000D through to the EOS 7D Mark II. The super-wideangle focal length range of this Canon EF-S 10-18mm f/4.5-5.6 IS STM lens is a perfect partner for the 18-55mm zoom that is usually supplied with these APS-C format cameras.
UK deal – ends midnight 16 JulyView Deal

Not an Amazon Prime member? Sign-up for a free 30-day trial to take advantage of these offers!

SanDisk Extreme Pro 64GB SDXC memory card  - £14.69
Looking for more cards for your DSLR, mirrorless camera or camcorder... then you need some of these. Amazon has knocked 39% off (or over £9)  this respected line of UHS-I cards. It has an impressive max speed of 170MB/s and a V30 video classification, so great for shooting sport, wildlife, weddings and 4K video.
UK deal – ends midnight 16 JulyView Deal

Insta360 EVO: was £419.99, now £335.99 @ Amazon UK
This is our top-rated 360 action camera at the moment. It is capable either 180-degree 3D imaging or regular 2D 360 video and stills, via a unique folding design that lets you clip its cameras back-to back (360) or lock them into a side-by side position (3D). Its square design makes it straightforward to mount as an action cam and gives its unique dual role.
UK deal – ends at midnight on 16 JulyView Deal

The best Amazon Prime Day camera deals: everything you need to know
The best Micro Four Thirds lenses in 2019