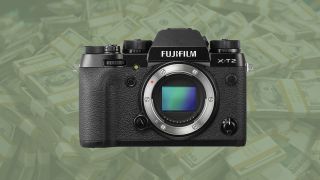 We've long been fans of the phenomenal Fujifilm X-T2, which has been a firm favorite ever since its release. However, with this remarkable deal at Wex Photo brings the price of this mirrorless model down to its best-ever price - just £599! No need to wait for the Black Friday camera deals, they seem to be starting already!

While it has since been succeeded by the X-T3, the Fujifilm X-T2 still packs dynamite specs that make this a powerful pocket powerhouse, equally capable of shooting professionally and taking fantastic vacation photos.

At its heart is a 24.3MP APS-C sensor, which produces Fujifilm's traditionally beautiful image files. And of course these can be embellished with the company's much-loved Film Simulations, enabling you to get the unique looks of Velvia, Provia and others in-camera.

It's not just gorgeous stills that the X-T2 specializes in; it can record 4K video at 30fps or 1080p at 60fps. Although it has a 1.17x crop factor in 4K, the camera still uses the full sensor area, so it is effectively recording in almost 6K resolution and then downsampling for 4K output.

It can also output externally at 4:2:2 8-bit, comes with an F-log option to facilitate detailed post-production and grading, and also boasts focus peaking and Zebra shooting for the really serious cinematographers out there.

On top of all that you have a tilting three-inch screen (non-touch) with 1.04 million dots, an electronic viewfinder with 2.36 million dots, and weatherproof construction to survive the elements.

This pro-quality APS-C mirrorless camera used to be the flagship in the Fujifilm X range - but now is cut to around half the cost it was about a year ago. The 24.3MP can record 4K video at 30fps or 1080p at 60fps. On top of all that you have a tilting three-inch screen with 1.04 million dots, an electronic viewfinder with 2.36 million dots, and weatherproofing to survive the worst of the winter weather. View Deal