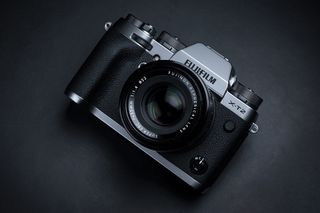 Aimed squarely at enthusiasts and professionals, this update of Fujifilm's X-T1 is a mirrorless enthusiast's camera that records 4K video as well as high-res stills – a feat that was a first for the X range, at the time of the camera's launch.

The X-T2 has now almost disappeared from the shops - having long been replaced by the X-T3 (and there are some great Fujifilm X-T3 deals that you should look out for, now that the X-T4 is on its way). But if you do find an X-T2 for sale, it can be a real bargain.

The X-T2 introduced tilting LCD screen to the Fujifilm X-series, which is an obvious boon for videographers. Naturally we also get a 2.36-million dot resolution eye-level viewfinder, which is twice as bright as its forebear’s, although the camera still sports the same weatherproofed construction we admired from the X-T1.

Under the bonnet, however, we find a number of useful tweaks. Chief among these is the incorporation of the same 24.3MP APS-C sized sensor as the X-Pro2, which may disappoint some hoping for a full frame version. Interestingly, AF-C custom settings include the ability to change focus tracking sensitivity, altering how sensitive the camera is to changes in subject velocity. This is potentially vey useful for those wanting to track fast-moving subjects.

For those who shoot video alongside stills, the built-in 3.5mm stereo microphone is fine to get you started, though for even better sound options, prospective purchasers might also want to investigate the battery grip which features a stereo microphone terminal.

Compatible accessories include the VPB-XT2 Vertical Power Booster, which increases capture speed from 8fps to 11fps and provides enough juice for 1000 shots (if added to the performance of the battery already in the camera). This also allows for up to 30 minutes of continuous 4K video. There's also the EF-X500 hot shoe mount flash, that's also weatherproofed to match the resilience of the X-T2's body.

Serious photographers looking for a compact all-rounder who haven’t already adopted Sony’s rival A7 system as a best-of-all-worlds solution should find this Fujifilm an enticingly safe pair of hands. We praised the previous X-T1 as an approachable and portable high-end mirrorless camera, and the X-T2 ups the performance ante a stage further.