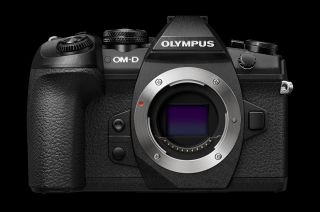 While 2018 was a massive year for the mirrorless marketplace, with Canon, Nikon and Panasonic unveiling their full-frame systems at Photokina. Conspicuous by its absence, though, was one of the pioneers of mirrorless cameras: Olympus.

The company was present but silent at the world's biggest photography event, and the most recent product it released was the entry level Olympus PEN E-PL9 in March. While a capable and highly popular 16MP camera, it was a knife in the gunfight that is the current "mirrorless war".

However, Olympus appears to be playing the long game in this particular campaign.

According to the latest camera rumors, the company will leapfrog the anticipated OM-D E-M5 Mark III (which would have been next in the product line to receive an update) and will instead come out guns blazing in 2019 with a radical refresh of its flagship model, believed to be named the Olympus OM-D E-M1X.

Indeed, Olympus has registered a new camera (codenamed "IM010") and we already know that the company plans something big for its 100th anniversary next year.

“We decided to decouple the Photokina event and the launch of a new product," said Stefan Kaufmann, Olympus CEO of Europe, Middle East and Africa, at the show. "For us, an important landmark will be the 100th anniversary of Olympus next year, and I would like to ask you to stay tuned."

So, exactly what do we want to see from the Olympus OM-D E-M1X – and what are we likely to get?

Unlike Panasonic, Olympus will not be joining the full-frame mirrorless arms race. “We believe the future of photography is mirrorless, but certainly not only full frame,” said Kaufmann.

“Micro Four Thirds will remain highly relevant, and we as a company will continue to invest and innovate in our camera system and our lens systems.”

This not only rings true with what our industry sources have said about Olympus' next move, but also with Fuji's attitude to the recent full-frame fray.

"If we entered full-frame [our systems] would just start cannibalising each other. We’re happy to stay with two completely independent systems.”

While many have claimed that Panasonic entering the full-frame marketplace was the worst thing that could happen to the Micro Four Thirds (MFT) format, for Olympus this is actually a good thing. It enables the company to further distinguish itself from the rest of the industry, rather than getting lost in the full-frame melee.

The biggest ever MFT sensor

Currently the largest m43 sensor is boasted by the current-line Olympus OM-D E-M1 Mark II – a 20.4MP camera that was released at the end of 2016. Since then, even Panasonic has only been able to produce a 20.3MP sensor for its latest bodies.

The old wive's tale has always been that Micro Four Thirds sensors could deliver a maximum of 24MP, so how much resolution can Olympus realistically achieve?

We believe that a 22MP sensor might be the sweet spot for the E-M1X. It would offer a significant pixel boost over all existing m43 cameras and, importantly, put the new system in the same megapixel ballpark as the APS-C format.

There are two inalienable truths about cameras: that all cameras have clunky and convoluted menu systems, and that Olympus' menu system is among the clunkiest of them all.

While photographers may be halfway familiar with the 'grammar' of camera menus, most still get lost when trying to find things like LCD brightness – let alone something like dial direction or stabilisation options. And even with a touch interface, most people still use the directional pad to navigate everything.

Compare this to the interface of your smartphone, which is instinctive, intuitive, speedy and simple – none of which are words that would be assigned to your camera menus.

Olympus has already attempted to remedy this with the E-M10 Mark III and the E-PL9, which feature streamlined menus with new options groupings and even graphics to illustrate features.

However, Olympus has the opportunity to truly revolutionise the way we use our cameras – and has already stated an intent to do so. "When it comes to ease of operation we will become more Apple-style than before – much more intuitive,” Stefan Kaufmann told us at Photokina.

Just imagine if Olympus has spent the last 12 months hiring developers of smartphone apps to redesign its interface… it's a genuinely exciting proposition.

Arguably more important than the size of the new sensor, however, is its sensitivity. In fact, we could see Olympus opting for a 21MP sensor instead of a 22MP if it resulted in improved ISO performance.

This is a key area for the Olympus OM-D E-M1X, and one that the company's R&D team has been working hard to improve, since low light capability is one of the areas where Micro Four Thirds has lost ground to larger sensors.

Panasonic came up with an ingenious solution on the Panasonic Lumix GH5S by incorporating a Dual Native ISO option (in addition to using a lower resolution sensor with larger photosites).

This employs two read-out circuits (two base ISOs) per pixel, rather than one the normal one, which gives the sensor more flexibility to amplify the signal (boost the ISO) at higher sensitivities and deliver cleaner results.

Olympus is aiming for serious improvements in low light performance, and there's a clear roadmap for how it can be achieved.

While Canon's Dual Pixel AF is widely regarded as the best in the industry when it comes to autofocus performance, both Fuji and Nikon have made significant steps in catching up with their own tracking systems.

Micro Four Thirds, meanwhile, has long lingered behind in the AF stakes – something that was exposed on a grand scale during the mass migration of YouTubers to the Panasonic GH5, and then just as quickly away from it again when thousands of vlogs were uploaded with the focus drifting in and out.

Of course, the GH5 uses the inferior contrast-based autofocus method. The E-M1 Mark II employs hybrid AF with on-chip phase detect and 121 cross-type points – but even then, the existing model can still struggle with focus hunting.

Improved autofocus and tracking is a key benchmark for Olympus' engineers, so expect core improvements to the base technology. It is also worth pointing out that, with its most recent firmware updates, Panasonic has dramatically improved the AF performance of the GH5.

With two years of both hardware and software innovation, the Olympus OM-D E-M1X will boast superior autofocus functionality.

Even when it was first revealed back in 2016, the Olympus OM-D E-M1 Mark II already had a burst mode that puts many 2018 bodies to shame. Capable of 60fps RAW shooting, it offered blistering speed – though it hit the brakes to achieve continuous autofocus, reducing that burst down to 18fps.

With two more years in the oven, the E-M1X should up the latter if not the former top speed, resulting in another pro-calibre pace that's ahead of the rest of the pack.

Dovetailing with this, we also expect the fantastic Pro Capture feature to return bigger and better. This brilliant burst technology captures 35 frames before you fully depress the shutter, in addition to all the frames you take afterwards, ensuring that you're never too late when trying to catch that critical moment.

A larger buffer would obviously enable the new camera to capture even more pre-press frames – and a beefier processor would enable that process to complete a little quicker when you've finished shooting, too.

What would really be interesting, though, was if Pro Capture could somehow be extended to video so that you don't miss those crucial moments when filming, too…

It's a given that the Olympus OM-D E-M1X will possess 4K video. And if the company wants to absorb some of the m43 market share that Panasonic will surely concede in pursuing full-frame, it will put some effort into delivering a proper flat log profile too.

Olympus has always been 'the stills side' of Micro Four Thirds while Panasonic has been 'the video side'. Again, though, Panasonic will be leaving this market wide open – so it makes sense for Olympus to capitalise by jumping on 6K functionality.

This is something that the Lumix GH5 already possesses; in particular, its 6K Photo Mode enables you to shoot 6K video clips and then extract 18MP still frames. This would be a compelling feature, and an Olympus-esque stills focus on 6K video.

When Olympus debuted the Hi Res Shot mode in 2015, it enabled the 16.1MP E-M5 Mark II to produce a 40MP image – a resolution unavailable on anything other than a medium format camera.

This was thanks to Olympus' stellar in-body stabilisation: the camera takes eight separate images, shifting the sensor half a pixel each time, then stitches them together to create a single, high-resolution composite.

The was a huge hit for shooting stationary subjects using a tripod – ideal for still life and architecture shooters – but even the most minute movement could disrupt the process and cause flawed results.

The Pentax K-1 Mark II made muddied promises to deliver handheld sensor-shift shots with its Dynamic Pixel Shift Resolution, but the function ultimately fell flat. Stability is such a key part of the process that true handholding may not be possible, but additional leeway might be feasible – particularly with improved stabilisation…

Olympus already boasts the most effective in-body image stabilisation (IBIS) on the market, thanks to its phenomenal five-axis technology. And with the likes of Fuji developing IBIS capable of stabilising a medium format sensor on its Fujifilm GFX 100S, it's clear that the tech can be further evolved.

Is there such a thing as six-axis image stabilisation? Whether there is or not, Olympus can already compensate for up to six stops of camera shake thanks to Sync IS.

This is a sophisticated mechanism featured in the Olympus 300mm f/4 Pro lens (which is 600mm in 35mm terms). The lens itself is stabilised, which handshakes with the IBIS in bodies such as the E-M1 Mark II, providing a double-stabilisation mechanism.

We expect that this technology will be furthered on two fronts. Firstly, the Olympus OM-D E-M1X will feature the most advanced IBIS yet seen in a camera. Secondly, Olympus has already confirmed that it will focus on developing its line of Pro lenses – and, assuredly, that Sync IS technology.

If both parts of that handshaking boast improved stabilisation, we could potentially be looking at seven stops of reduced camera shake. Combined with the larger sensor and improved AF, that would make the E-M1X a killer wildlife camera.

Olympus is keen to focus on areas where Micro Four Thirds sensors create an inherent and unique advantage, the main one obviously being size. While bodies such as the PEN EP-L series and OM-D E-M10 Mark III offer remarkably compact form factors, as a pro model the E-M1 has always been built a little larger.

Think the same form factor as the Canon EOS-1D X (158.0 x 167.6 x 82.6mm), which is obviously a pro-grade and pro-scale body. The E-M1X will also retain the Olympus flagship's pro features – namely full weather sealing and two SD card slots, though we expect both slots to be UHS-II compatible this time.

Olympus was established on 12 October 1919, meaning that its 100th birthday will  be on 12 October 2019. For a camera intended to coincide with the company's centenary, a release on or prior to this date would seem prudent.

It is likely that the Olympus OM-D E-M1X will be officially unveiled at Photokina in May, which may see it face off against two new Canon EOS R bodies as well as the Panasonic Lumix S1R and Lumix S.