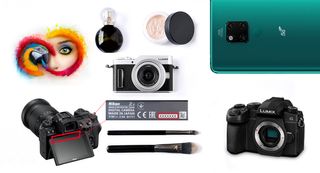 Up in the cloud, there was some serious noise surrounding Adobe's Creative Cloud platform, after the company sent warnings to its customers about potential legal action being taken against them.

So, from firmware to phones, here are the five biggest news stories of the week…

The previous week ended with Adobe abruptly discontinuing older versions of Creative Cloud applications; this week started with Adobe warning its customers that continuing to use them could result in legal action.

All but the latest two versions of every CC app (with the exception of Acrobat, which only has the latest version) were removed by the company, which came as a surprise to many subscribers who had no idea that the older software they were paying for would suddenly be discontinued.

Further to revoking customers' licenses for older apps, Adobe then emailed customers to inform them that they "may face potential claims of infringement" – a result, it seems, of Adobe's ongoing legal tussle with Dolby over disputed fees when the company migrated to cloud-based software.

It wasn't just Adobe warning customers of potential problems – Nikon also had to inform its users of product issues this week.

The company issued a Technical Service Advisory for the Nikon Z6 and Nikon Z7 cameras, due to problems affecting the in-body images stabilization (vibration reduction) on both full-frame mirrorless systems.

Nikon provided a microsite to check if your camera is affected, and also offered to provide free repairs for faulty units – even if customer warranties have expired or are no longer valid.

The camera phone market continues to explode with exciting, high-end products, and we've seen a whole host of next-generation performers this past week.

And finally, we got hands-on for our full review of the OnePlus 7 Pro – a triple-camera,  48MP device with a James Bond-esque pop-up selfie camera!

Despite the above potential issues with Nikon's full-frame mirrorless cameras, the Z6 and Z7 have just received a pretty beefy firmware update that adds some robust autofocus functionality.

Headlining the firmware 2.0 is the much hyped Eye-Detection AF, which is almost spooky in its recognition and tracking accuracy both for single and multiple subjects.

The other big additions with the update are significantly improved low light autofocus capabilities in both stills and video mode, as well as full-time autoexposure at both cameras' maximum burst rates.

After apparently falling out of love with the format, in favor of its new full-frame Panasonic S1 and Panasonic S1R cameras, one of the founders of the Micro Four Thirds standard has affirmed its commitment with a pair of new cameras.

The Panasonic Lumix GX880 has been announced in Europe, after previously being an exclusive to the Asian territories as the GF10W / GF90W. This 16MP body is packed with 4K video and still functionality, and boasts a 180-degree flipping selfie screen that makes it perfect for blogging and social-focused photography.

We also had a chance to put the new Panasonic Lumix G90/G95 20.3MP mid-range mirrorless camera through its paces, in our full review and lab test. Could this be the perfect hybrid all-rounder for photos and video?