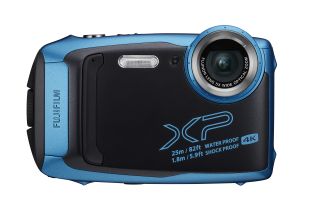 If you are looking for a waterproof camera for a gift for someone this holiday season, then we have spotted this great deal from B&H. The Fujifilm Finepix XP140 is the very latest in the manufacturer's family of ruggedized compact cameras - and is just the ticket for use on ski slopes, on boats, at the seaside, or in the hands of someone who is likely to drop it!

This deal gets you the blue version of the camera for a very tasty $159.99 - which is definitely a lot cheaper than we can find on sale anywhere else.

The XP140 can now taken 25m underwater - 5m deeper than its predecessor.  It can be dropped from a height of 1.8m. It is dustproof too, and is freezeproof being capable of functioning at -10°C.

The key new feature of the 2019 model is the introduction of 4K video shooting, whilst retaining a 16.4 megapixel back-illuminated CMOS sensor.

Fujifilm XP140 waterproof compact $159.95 (save $70
This would make a great gift for someone... the adrenaline junkie in the family, the outdoor sports fan, or the beach lover. The Fujifilm XP140 is waterproof to a depth of 25m, and shockproof too. It has a built-in 5x zoom and a 16 megapixel sensor.
US dealView Deal

Other features include 10fps burst shooting and a newly installed electronic level, together with image stabilization that's designed to keep images crisp and videos stable.

Wi-Fi and Bluetooth have also been included on the XP140, which allow the camera to sync with smartphones and tablets and take advantage of the Fujifilm app that's available for iPhone and Android.