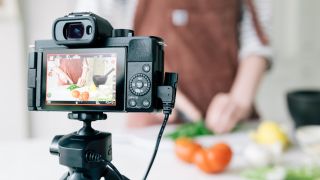 With the Lumix G100, Panasonic has launched another video-centric Micro Four Thirds mirrorless camera into an already crowded range, but the G100’s design is brand new and aimed squarely at newbie vloggers. The price point is refreshing too!

• The best cameras for vlogging

Like the rest of us, Panasonic sees vlogging as a strong and growing market, and the G100 is a response to that. To be called the G110 in some countries, the G100 is not aimed at camera experts, but at smartphone upgraders looking to swap to a proper camera, so its design, its controls and its price reflect that.

Panasonic makes plenty of serious video cameras, including the Lumix GH5, which is popular with filmmakers, for example, and the G90/G95, which is itself intended as a tool for ‘content creators’. But these are quite big, technical cameras that have price tags to match. The new G100 is neither – and yet it comes with vlogging and video features that might make you wonder if you do actually need to spend more. Already it looks like it could become one of the best cameras for vlogging that you can buy.

The MFT sensor may be small in comparison to those in full frame mirrorless cameras, but it’s huge compared to the sensors familiar to smartphone users – Panasonic’s target audience – and brings a big step up in image quality, not to mention interchangeable lenses.

Visually, this is very different to other Panasonic Lumix G cameras. It has a compact, sharp-edged body that looks a lot like the Nikon Z 50 and completely different to Panasonic’s larger and more rounded GH5 and Lumix G90/G95.

The G100 might be very affordable compared to other Lumix G models, but Panasonic has not stinted on specs. The G100 comes with a fully vari-angle LCD display and a high-resolution 3.68m dot electronic viewfinder. It also comes with Panasonic’s V-Log L log mode included, another high-end feature.

Image quality isn’t the only challenge for novice vloggers – audio quality is just as important. The usual solution is to plug in an external mic (the G100 does have a socket), but Panasonic has built in OZO Audio by Nokia, a system which uses a three-module internal mic in conjunction with the camera’s own face-detection technology to effectively follow the speaker around the frame and adjust the audio to match their distance and location.

The new system is also designed for vloggers who need to talk to the back of the camera while filming. That’s not a normal video technique, but very common for vlogging where you need to provide a live commentary on what you’re filming.

More experienced vloggers are likely to use an external microphone for the best audio quality, but the G100 is designed for newer users who aren't yet ready for this kind of complication. There is also a Video Selfie mode that’s triggered automatically when you flip the screen round to face the front. Face detection AF is used automatically and the sound is adjusted at the same time.

The video specs themselves are what we’ve come to expect from a vlogging camera now, with 4k resolution and a maximum 30p frame rate. There are ‘slow’ and ‘quick’ modes offering up to 4x slow motion and 8x quick motion, with AF active throughout. If that’s not enough time-dilation, there are also time-lapse and stop-motion modes.

You can also shoot vertical video for smartphone consumption, with an on-screen Frame Marker feature to aid composition when shooting for different social media aspect ratios.

The camera uses Panasonic’s 5-axis hybrid image stabilization system, but specially tweaked for walking and shooting. There will be an optional DMW-SHGR1 for extra stability, with fold-out tripod legs and remote camera controls via USB connection, and this will be sold separately or as part of one of the Lumix G100 kits.

The Lumix G100 will be available in three kits: