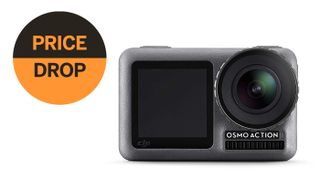 The DJI Osmo Action is one of the very best action cameras out there. And its currently among the most attractive Walmart Black Friday deals, as it's down to just $274.99 – the cheapest price we've seen it anywhere!

This $104 saving is one of the best Black Friday camera deals we've seen, especially since the DJI Osmo Action is among our favorite action cams (in fact, it even performs the GoPro Hero7 in some respects!)…

DJI Osmo Action: $274.99 (was $379)
With 4K video, 2 screens (front and rear), premium waterproof build and excellent stabilization, the DJI Osmo Action is one of the best action cameras available – especially with a $104 saving!
US dealView Deal

The DJI Osmo Action is a fantastic 4K action cam – in fact, we rank it third on our guide to the best action cameras, thanks to its 12MP sensor, 1,300mAh battery, and 4K video at up to 60fps in either 4:3 or 16:9 aspect ratio. And DJI’s proprietary image stabilization system, RockSteady, is fantastic.

Indeed, DJI has managed to create an action cam that stacks up to the best out there when it comes to stabilization and picture quality. Despite being the first of its line, the Osmo Action is an ideal GoPro Hero7 Black alternative for vloggers and self shooters.

The best Black Friday camera deals in 2019: the best buys we have seen so far
DJI Black Friday 2019: massive price drops on DJI drones and action cams
The 10 best action cameras in 2019: cameras you can take anywhere