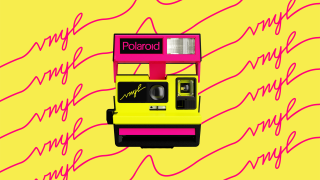 Love shooting instant film? Always wanted an uber-exclusive Polaroid camera? Worried about not taking photos because you always forget to buy fresh packs of film? Then the VNYL Cam service might be for you.

The officially licensed offering from VNYL – Very Nice You'll Love, "the company reimagining retro experiences for modern audiences" – comes with an exclusive neon-colored Polaroid 600 camera and three packs of film, along with monthly deliveries of two packs of film.

The hot pink and electric yellow version of the Polaroid 600 – the iconic instant camera of the Eighties – might be temptation enough for avid Polaroid fans, given the popularity of collectible versions like Hello Kitty and MTV-themed editions.

Monthly film refills can be upgraded to premium or limited edition packs, and each month's delivery (or additional film order) can be done by SMS for an "offline experience" befitting the VNYL ethos.

“In the age of smartphone photography, we’ve lost track of our personal photos that are now buried in our camera rolls,” said VNYL's founder and CEO, Nick Alt. “At VNYL, we believe in unlocking the magic of analog devices in our screen-saturated lives. VNYL Cam allows you to find ways to stay in the moment by creating offline memories that don’t get lost in the cloud."

You can find out about the VNYL Cam service at the official website.