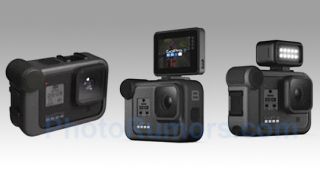 UPDATE: Both the GoPro Hero8 Black and GoPro Max are set to be revealed by the company on 01 October – full story here.

ORIGINAL STORY: Images and information have leaked of the GoPro Hero8 – the latest iteration of the pioneering action camera.

According to the leak, the GoPro Hero8 will shoot 4K video up to 120 frames per second and boast an improved sensor – as well as a redesigned body that accommodates all-new accessories, such as a microphone, LED light and an external selfie screen.

The market was in danger of getting stale not long ago, but it was reinvigorated by Sony and DJI releasing some of the best action cameras we've seen to date. They introduced some new features that seriously things shook up – and GoPro has clearly been paying attention.

The most obvious tip of the hat is to the Sony RX0 II, which introduced a flipping selfie screen to the action cam sector that made it an immediate option for the vlogging crowd.

The leaked details from Photo Rumors (by way of PetaPixel) depict a newly designed GoPro Hero8 chassic, boasting a shoe on the top and side of the body to mount accessories including a rear-facing monitor – in effect, a vlogger-friendly selfie screen.

It's arguably a more ergonomically elegant solution than the DJI Osmo Action, which introduced an integrated selfie screen on the front of the camera, but obviously the issue is that you need to pay extra for the Hero8's screen – which will also be less robust than the in-built options on the RX0 and Osmo.

Introducing multiple mounts, though, gives the GoPro Hero8 much more versatility; the ability to mount a selfie screen, an LED lamp and a microphone all at once is a very tempting proposition.

Also tempting are the Hero8's slow-mo and super slow-mo video options. Thanks to a new GP2 processor, the camera can record 4K video at up to 120fps and 1080p video at an impressive 480fps.

With an official announcement due in September, we look forward to getting our hands on the Hero 8 soon and seeing how it stacks up to the new kids on the block.

The best GoPro cameras in 2019: fantastic action cams you can buy right now
The 24 best GoPro accessories in 2019
GoPro Hero7 review: Black vs Silver vs White