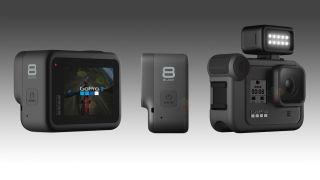 A YouTube video will host a live stream that kicks off at 09:00 EST / 14:00 BST, titled "Beyond Next Level". The latest sizzlers on the GoPro website bear the tagline "This is Action", which seems to be the maxim for the new products.

The latest video sizzler (below) gives the briefest glimpse of the back of the GoPro Hero8, while an earlier video also gingerly teased the front.

It's all very coy of GoPro to pretend that we've never seen these cameras before, but of course they both leaked some time ago – we've already posted images of the GoPro Hero8 Black and the GoPro Max (the successor to the GoPro Fusion 360).

And if that weren't enough, Photo Rumors has posted a full set of product images of the Hero8, along with shots of the packaged camera. The site also shared leaked pricing from retailers in Poland, putting the RRP at zł1,899,00 – approximately $475.

The packaging confirms many of the specs that have been rumored. The GoPro Hero8 Black will feature a 12MP camera, shoots 4K video up to 60 frames per second and 1080p up to 240, along with 1080p live streaming, HyperSmooth 2.0 image stabilization and more.

The leaked images confirm that the camera will feature different housings, including one for blogging and broadcasting that boasts a microphone and dedicated mounting shoes.

These would support add-ons such as LED lighting panels and external monitors, both of which GoPro would like to sell you – unlike the Sony RX0 II, which has a built-in flipping monitor, or the DJI Osmo Action, which has a front-facing screen for vlogging.

While there aren't many surprises left for the GoPro Hero8 Black (though it's highly likely that news of a Silver and White will be forthcoming), we look forward to seeing what the company has in store later today!

The best GoPro cameras in 2019: fantastic action cams you can buy right now
The 24 best GoPro accessories in 2019
GoPro Hero7 review: Black vs Silver vs White
The best 360 cameras