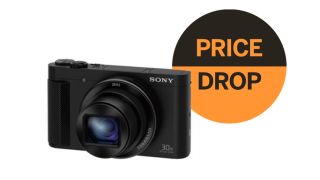 Cyber Monday doesn't officially start for another few hours, but we've got a fantastic Cyber Monday camera deal that's available right now. You can pick up the Sony Cyber-Shot HX90 compact camera for only £175 down from £300 (including £50 casback)!

This handy little camera features 1080p Full HD video, an 18.2MP sensor and 30x Optical Zoom. It also has a 3" 180-degree tilting screen, which means you can capture selfies or vlogging footage as easily as possible. The camera even has a pop-up OLED viewfinder that features real-time data for planning and previewing photos.

Sony Cyber-shot HX90: £175 from £300
A Sony compact camera for under £200?! This amazing Cyber Monday deal doesn't pull any punches. Grab the Sony Cyber-Shot HX90 camera for just £175 (after £50 cashback) from either John Lewis or Amazon UK. UK deal
View Deal

With a Zeiss Vario-Sonna T* zoom lens and a five-axis image stabilization system, the Sony Cyber-shot HX90 produces high contrast and sharp images. This lens is capable of a 30x optical zoom and 60x with Sony's Clear Image Zoom technology, which enables you to capture faraway subjects in incredible detail.

This compact camera is perfect for both vlogging and photography, so don't miss out on this best-ever price for the Sony Cyber-Shot HX90.