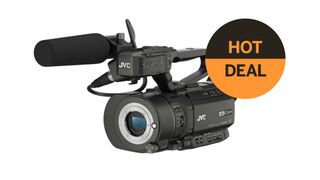 The Black Friday deals  are coming hard and fast now, with lots of retailers offering some really great discounts ahead of the day itself. If you're a shooter looking for a camcorder that can deliver beautiful 4K Ultra High Definition video, then check out this great bargain from B&H...

The GY-LS300 incorporates 3G-SDI and HDMI outputs, supporting 4K output over the HDMI out.

The GY-LS300 is capable of supporting wireless streaming to a variety of streaming services while simultaneously recording HD to an optional memory card: which is a boon.

The discount being offered here is for the camcorder body only (and does not include a lens), however, the camcorder features an MFT mount so you can use a wide variety of full-frame, PL, C, and EF mount lenses with optional adapters.

It also features both a flip out 3.5 LCD view screen and flip up EVF, so it's perfect for reviewing your footage. It also features a detachable handle which provides two XLR audio inputs, both with phantom power.

Read more:
The best camcorders in 2019: which is the right one for you?
Best cameras for vlogging
The best 4K camera for serious filmmaking
Best paid-for video editing software for vloggers and filmmakers