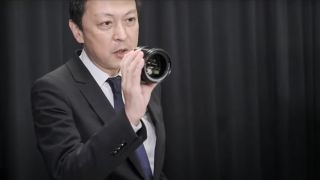 UPDATE: The Fujifilm XF 50mm f/1.0, the fastest autofocus lens in the world, is still on course to be released this year, according to Toshihisa Iida.

The general manager of Fujifilm's Electronic Imaging and Optical Device Products Division made an appearance during the virtual launch of the Fujifilm X-T4 in India, and he brought with him a working sample of the Fujifilm XF 50mm f/1.0.

"This is a world first f/1.0 super bright lens with autofocus system. And this is a very early prototype working sample, which I can show you. So this is the glass, this a big glass, but overall the size it’s not that big. It is a perfectly fit in my hand with a X-T4. So we’re introducing this very fast, bright, accurate focus lens this year. You will be looking forward to it."

There had been some suspicion among industry insiders that the 50mm f/1.0 may ultimately never appear, given that it rose from the ashes of the abandoned 35mm f/1.0 – and especially given the current crisis.

However, this reassurance from Fujifilm's head honcho suggests that the lens is still alive, still on track, and still due to release in 2020.

ORIGINAL STORY (05 February): Fujifilm will be launching its incredible 50mm f/1.0 lens for its X range of cameras THIS year. But at the X Summit last night, the mirrorless manufacturer also made it clear that this won't be the only new addition to arrive for the XF mount roadmap this year... there will be three further lenses that will arrive in 2020.

There were no details as to what the extra lenses will be, and when we will get more information. However, we now now that Fujifilm will have another major press conference later this month on 26 February... where the new Fujifilm XT-4 flagship will be revealed. More lenses could well be announced here.

The Fujinon XF50mm F1.0 WR lens was originally announced in September last year as a concept lens... and one that replaced the original intention to produce a 35mm f/1.0 lens for the system. The change in tack was put down to the fact that the 35mm version would be too big. But now the concept is set to be a reality with the news that this innovative prime will be available to buy by then end of the year.

At the conference, journalists were shown an early working sample of the Fujinon lens - showing it working with contrast detection autofocus (the final version will also work with phase detection AF).

We also got to spend a few moments with the new lens during a private Q&A session with Fujifilm executives.

The optical construction of the lens was also revealed for the first time, which uses a novel system to achieve the combination of super-fast light-gathering characteristics as well as AF performance. The elements are essentially split into two groups. The front elements are the big, light gathering glass... and at the back smaller, lighter elements are used to adjust the focus.

There are eight elements in the front group - of which two will be ED lenses. And there are a further five elements in the rear focus group. The other specification to be revealed is that it will have a 77mm front filter ring.

With an effective focal length of 75mm, the super-fast prime lens is bound to become a favorite amongst portrait photographers who want maximum bokeh. And unlike with rival lenses, the difficulties of getting the image sharp in the right area with a lens with such limited depth of field when used wide open can be left in the hands of the autofocus system.