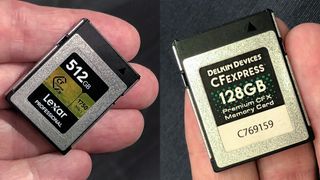 Lexar and Delkin announced that they had high-speed Type B CFexpress memory cards ready to ship at PhotoPlus Expo 2019. The two card manufacturers join Sandisk and Angelbird that announced their ranges back at IBC 2019. The new type of memory card, specifically designed for professional DSLRS, mirrorless cameras, camcorders and cinema cameras.

The first camera to use the memory card will likely to be the Canon Cinema EOS 500 Mark II which goes on sale in December. Nikon and Panasonic will also issue firmware upgrades to allow cameras such as the D5, D850, Z7, and Lumix S1R to be able to use CFexpress cards in their cameras XQD memory card slots. Earlier this week, Canon confirmed that its next top of the range sports DSLR, the Canon EOS-1D Mark III will feature two CFexpress card slots.

Lexar will offer four different capacities of CFexpress cards - 64GB, 128GB, 256GB and 512GB. These will offer read speeds of up to 1750MB/s - nearly six times faster than the company's fastest SD cards.  The write speeds of up to 1000MB/s - a fourfold performance increase over SD.

Lexar will also be producing a Professional CFexpress card reader with a USB 3.1 connection socket, which will be supplied with a USB-C cable.